The Kilted Dad is an average American Dad – overweight and underfit. He spent years eating too much and exercising too little. What sets him apart is that when he finally decided to do something about it, he chose to further embrace his Scottish heritage in his quest for fitness.

But he’s decided to do something about it, and he’s doing it KILTED! Plus, the Kilted Dad is sharing his fitness journey through his blog.

The Kilted Dad was fit enough as a young kid running around the yard, biking throughout 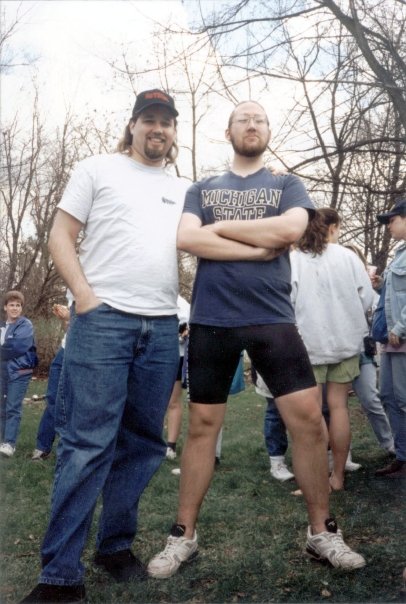 the neighborhood and the woods behind his home. But after 5th grade (and the disappointment of getting glasses) he became less active. He grew tall, but not as strong as he could have because he didn’t participate in any sports – he spent his time camping and hiking with his Boy Scout troop and hunting with his dad and grandpa.

By the end of his undergraduate career, pictured here preparing for a coed Jell-O Wrestling match, he was probably at his prime with a physique shaped by 10-15 miles of cycling daily commuting to and getting around on campus. At the time, he felt he was overweight, but now would very much like to achieve that level of fitness again. His weight was unknown at the time, but he wore 36” jeans throughout undergraduate and graduate school.

By the he got married in 2001, his pants had increased to a 38” waist, and his 42” Long jacket was getting a little tight around the middle. The wedding would be the second to the last time he would wear his first kilt (so far). It would make the trip to one more Highland Games before it would retreat to the closet indefinitely. 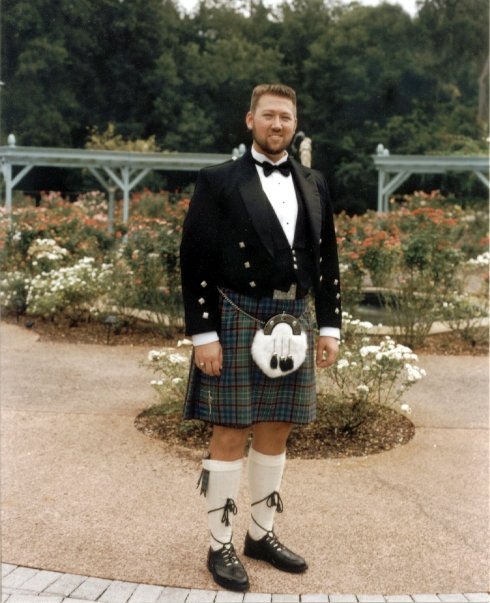 As an increasingly stressful and sedentary career track, decreasing job satisfaction, and worsening dietary habits combined to help the Kilted Dad add on the pounds, he also failed to exercise for months on end. Not realizing how far he was slipping, the Kilted Dad added pounds and inches year after year.

In fifteen years, his 36” waist grew to a 46” waist (measured under the gut). He went from a 46” jacket to a 54” husky jacket. From an XL t-shirt, to a 3XLT (the extra length necessary to keep from hanging out under the hem). Worse than that, he went from an unknown, but reasonable enough weight to top out at 354 pounds!

The Kilted Dad had been unsatisfied with this since at least 2010 when he realized that he had reached 280 pounds. But he failed to act to stop the increase, and in time doubled down on the bad behaviors. This in turn brought his blood pressure from perfectly normal to requiring daily medication by 2013.

Time for a Change!

Despite all of the health risks, the real catalyst for change came from his involvement as a board member of his Scottish clan society. Specifically, he couldn’t wear his kilt to events because it was 10 inches smaller than his waist. If you’re not aware, good kilts are really expensive, and he didn’t want to buy a new one for fear of outgrowing it as well. 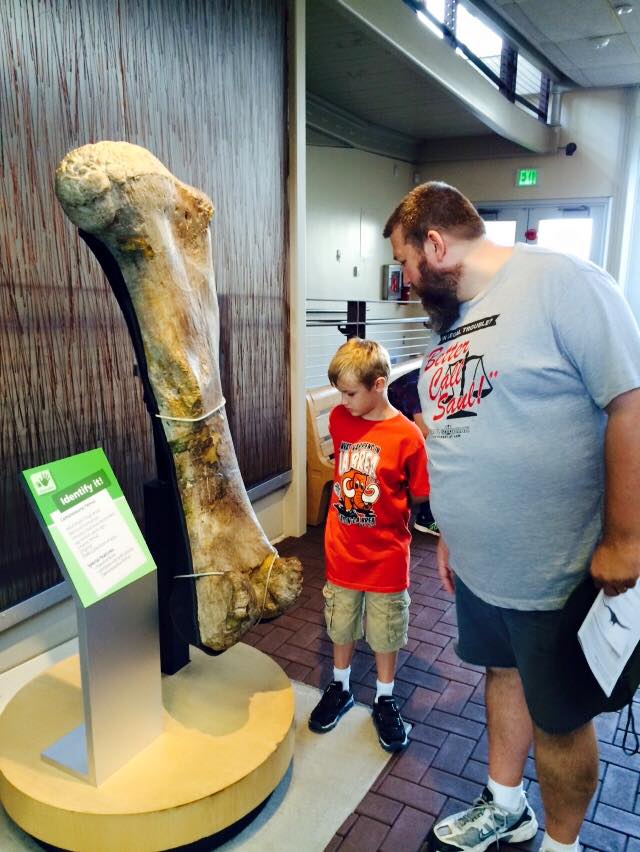 The Kilted Dad started adjusting his diet and trying to get more active. He started to lose weight, but after a quick fifteen pounds the first month, it slowed, and plateaued. Six months later he had achieved around 25 pounds of loss. Ten months later, an active moving day and very little consumption brought his weight down as far 304 (50 pounds!) but rebounded back up to around 309 where it remained through the holidays and the cold snap impeding his exercise routine.

Looking back, those were good results for 2017. But they were also inconsistent. 2017 lacked a plan. In 2018, the Kilted Dad developed a plan to get Kilted (back in his good kilt) and KILTED! (see the Get KILTED! page for more details).

There are two things which set the Kilted Dad apart from other fitness sites. It’s not the kilt, because he’s not the only one out there who wears one. First, it’s his KILTED! Philosophy to wellness, a collection of 7 principles to guide you on your quest for overall fitness. And second, the Kilted Dad is not in good shape. He’s not a fitness coach, not a dietician, and certainly not an expert. That means he has the same perspective as you. He struggles, stagnates, and sometimes fails.

The Kilted Dad will be serving hefty portions of fitness and nutrition, seasoned with Scottish culture, with some parenting and social commentary on the side. On this journey, you will also meet The Kilted Wife, a former College Athlete, who will share her observations on stretching, conditioning, nutrition, and a whole host of other fitness topics. There will also be input from the Kilted Kid, the fittest member of the family, with information on nutrition for kids and his Fit Facts. For more information on us, check out The Man in the Kilt, The Kilted Wife, and The Kilted Kid.

The Kilted Dad hopes you will join him too! You can help keep him accountable on his quest. And hopefully his journey will help you along yours as well. Join the Kilted Dad as he explores the KILTED principle, explores better health and fitness, parenting, and Scottish culture!