A kilt is a knee-length skirt-type garment, with pleats at the back, originating from the traditional dress of men and boys in the Scottish Highlands. Traditionally made from wool cloth woven with tartan or plaid patterns they have come to be one of the dominant symbols of both Scotland and the Scottish clans.

The great kilt, first documented in the 16th century, is a full-length garment whose upper half could be worn as a cloak. It is the ancestor of the small kilt or ‘modern’ kilt which emerged in the 18th century, and is essentially the bottom half of the great kilt (seen at right).

Tartan patterns are made by weaving alternating bands of different colors at right angles to each other. The same pattern or thread count, known as a sett, is used both the warp and weft (vertically and horizontally) to create a recurring pattern of lines and boxes.

The term plaid come from the Gaelic word meaning blanket. The original version of the kilt, the belted plaid, is essentially a large blanket folded into pleats and gathered at the waist with a belt. Since these blankets were commonly maid from tartan patterns, the term plaid came to be used for the tartan pattern.

Tartan cloth has been found worldwide dating as far back as 3000 BC, but the earliest known surviving examples from Scotland only date to the third or fourth century AD. For centuries in Scotland, materials were hand woven locally, and the patterns were most likely indicative of personal preference and the local availability of dyes.

Only after commercial weavers began producing tartan by the end of the 18th century did the concept of standardized tartans begin. William Wilson & Sons of Bannockburn was the largest such manufacturer as the sole supplier for the Highland regiments and their early pattern books only listed numbers for each pattern. By 1819, only about 100 of their 250 available patterns had associated names. Therefore, it is widely accepted that most modern tartans and their clan associations are of 19th century origin.

Today, tartan is synonymous with clans with each clan having one or more distinct (and frequently unique) patterns which have their setts registered with the Lord Lyon, the supreme authority for heraldry and arms in Scotland.

Most clans will recognize two basic tartans: a dress pattern and a hunting pattern. Dress patterns will typically make use of bright colors while hunting patterns will use darker ones or more earthy tones, a sort of tartan camouflage pattern (hence the name hunting tartan). Both of those patterns can be produced in 3 different varieties through manipulation of the dying process. “Modern” tartans have the darkest or boldest colors resulting from the modern chemical dyes. “Ancient” tartans are dyed to have a more faded appearance, emulating the original natural dyes used for the wool. Finally, “Weathered” or “Muted” tartans are made by interspersing brown or grey threads into the sett and are thought to most closely represent the appearance of pre-19th century tartan patterns which were produced with all natural dyes.

These six tartans pictured above all belong to the Clan MacNicol. The two in the center are their modern dress (red) and modern hunting (blue/green) patterns. Moving away from the center, next comes the ancient dress (orange) and ancient hunting (lighter blue/green). On the ends are the weathered dress and weathered hunting. Close examination of the tartans will show that the three hunting tartans have an identical pattern with the only difference being the variation in the shade of the dyes.

Kilts are not as old a popular culture and Braveheart would like you to believe they are. The best source for early attire in Scotland is Old Irish and Highland Dress by H.F. McClintock more primary source evidence than any other similar work. Many early images throughout Ireland and Scotland thought to depict kilts are most likely not. The standard garment in these areas from at least 1000 AD was the léine, Gaelic for “shirt.” It is a simple tunic worn about knee length for men and longer for women. In colder weather, this would be covered by a heavy woolen wrap called a brat in Ireland and a plaid in Scots Gaelic.

Although later in date than some examples, the attire of the warrior depicted here in both photo and drawn form, could be interpreted as a pleated garment. However, the MacSween effigy from the Isle of Skye shows another example of a “non-kilt.” The warrior is wearing what is known as an aketon, a heavily padded, knee-length coat which was a common form of Highland armor in the 15th century. The armor interpretation is supported by the sword, bascinet helmet and the chainmail aventail also worn by the figure.

The first garment that is what we would think of as a kilt is alternately called the Breacan an Fhéilidh (belted plaid) or Feileadh Mòr (great plaid). As wool became more readily available and cheaper during the 16th century, the plaid cloaks worn by the people of Scotland became bigger and were more commonly made from the more elaborate tartan cloths. They were typically two loom widths of fabric sewn together to make a garment 54 to 60 inches wide and up to 7 yards in length. This garment was gathered up into pleats and belted around the waist.  The remainder could be either gathered to hang in the back, gathered and pinned over the shoulder, or draped over the head and shoulders for protection from the weather.

A 1746 description of the great kilt reads:

The garb is certainly very loose and fits men inured to it, to go through Great Fatigues, to make very quick marches, to bear out against the Inclemency of the Weather, to wade through Rivers and to shelter in Huts, Woods and Rocks upon occasion: which Men dress’d in the Low Country Garb could not possibly endure. But then it is to be considered, that as the Highlands are circumstanced at present, it is, at least it seems to me to be, an Utter impossibility, without the advantage of this Dress, for the Inhabitants to tend their Cattle, and to go through the other parts of their Business, without which they could not subsist; not to speak of paying Rents to their Landlords. 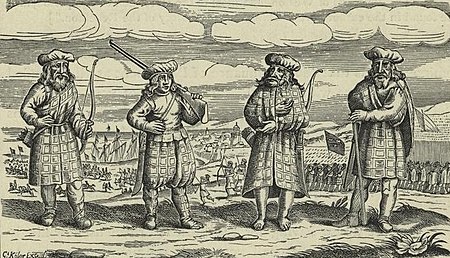 The feileadh beag (small kilt) or philabeag was invented in the 1720’s by Thomas Rawlinson, and English Quaker doing business in the Highlands. He felt the great kilt was too “cumbrous and unwieldy” for workmen in his business ventures. Partnering with a local tailor, he created a shorter kilt, essentially just the lower half of the great kilt without the cloak portion, using single width of fabric with the pleats sewn in.

Following the Battle of Culloden in 1746, the last rebellion of the Stuart sympathizers against the Hanoverian monarchy, Jacobite supporters, mostly Highlanders, were hunted down and either arrested or executed. Seeking to reduce the threat of another uprising supported by the clans, parliament enacted of legislation designed break the clans and eliminate their underlying culture.

The Act of Proscription 1746 reinforced previous Disarming Acts and added the Dress Act. The Disarming Act had been passed in 1716 after the first Jacobite rising and outlawed Highlanders to have “in his or their custody, use, or bear, broad sword or target, poignard, whinger, or durk, side pistol, gun, or other warlike weapon.” Further details of the disarming Act outline the procedures and authorized parties for collection of arms. The Dress Act shows that parliament thought that simply confiscating weapons was not enough and attacked what they thought to be the chief symbol of the clans – kilts and tartans. The Dress Act reads:

From and after the first day of August, one thousand seven hundred and forty seven, no Man or Boy, within that part of Great Britain called Scotland, other than such as shall be employed as Officers and Soldiers in His Majesty’s Forces, shall, on any pretence whatsoever wear or put on the Clothes commonly called Highland Clothes (that is to say) the Plaid, Philabeg, or little Kilt, Trowse, Shoulder Belts, or any part whatsoever of what peculiarly belongs to the Highland Garb; and that no Tartan, or party-coloured Plaid or Stuff shall be used for Great Coats, or for Upper Coats; and if such Person shall… wear or put on the aforesaid Garments, or any part of them, every such person so offending… shall suffer imprisonment, without Bail, during the space of Six Months, and no longer; and that being convicted for a second Offence before a Court of Justiciary, or at the Circuits, shall be liable to be transported to any of His Majesty’s Plantations beyond the Seas, there to remain for the space of Seven Years.

The Proscription Act was enacted based on the belief that the tartan patterns were indicative of clan loyalties. However, there is little antiquarian evidence that specific tartan patterns, known as setts, were exclusive to specific clans or families. Rather, they were more likely indicative of the regional availability of dyes where the fabric was woven. Therefore, clans may have worn different patterns or colors of plaids by default of their varied geography, but not through any tradition or regulation as is managed by the Court of the Lord Lyon for modern tartan setts. Although the Dress Act was repealed in 1782, a generation had passed and the damage was done. Traditional tartan patterns as they existed were mostly lost and new ones created by the mills producing tartan once it came back into vogue.

The kilt was not re-adopted for daily wear throughout the Highlands after the repeal of the Proscription Act. Today, most Scots consider the kilt a formal garment more likely to be rented than to be owned – the equivalent of a Tuxedo for the average American.

The tailored kilt was introduced in the 1790’s using about 3.5 to 4 yards of material and was box pleated to the line. In 1853, the Gordon Highlanders adopted the knife pleat which was soon adopted into civilian use as well and kilts started to be tailored pleating to sett (arranging the pleats so that the tartan pattern continued uninterrupted across the back of the kilt). By 1900 the average kilt had grown to require 6, 7 or even 8 yards of material to achieve the pleating to sett.

Today, kilts can be purchased running the range from $50-70 for “off the peg” casual kilts using cheaper materials and Velcro rather than straps all the way up to $800 and more for a bespoke custom kilt from heavy weight wool.

There are over 7000 registered tartan patterns covering clans and families, universities, cities, regions, and civic organizations. There are no rules that require you to prove ancestry or to belong to a specific group or clan to have the right to wear a kilt or wear a specific tartan. The only rule really is that you should wear what you like. However, most people buying a kilt will try to find one that has some meaning to their ancestry.

In recent decades, kilts have been making a bit of a comeback as an article of daily wear. These contemporary or utility kilts are made from a full range of materials including cotton, denim, corduroy and even leather. They may include tartan, but many do not. They also have many variations on the traditional kilt like Velcro or snaps instead of buckles and many also include pockets to eliminate the need for a sporran.