A Kilted Dad on the Silver Screen

James Cosmo is a talented Scottish actor who is perhaps best known for playing “kilted” dads.

Like many fans of Scottish history, I am awaiting the premier of the Netflix original series Outlaw King with trepidation. While I am looking forward to the story and hoping for a historically accurate portrayal of the Wars of Independence, I have reservation in the casting of Chris Pine as Robert the Bruce.

I have nothing against Chris Pine. He plays a mean James Tiberius Kirk – although some would say a wet sporran could have done better than Shatner – but like many I worry that any American playing such an iconic Scot could end end up falling short in the role (does anyone else remember Costner as Robin Hood?).

“The fight scenes are epic. A couple of special effects guys told me if people were impressed by the blood and gore of Braveheart, they haven’t seen nothing yet. The gory scenes are going to blow folk away.”

The most recent article I read about the Outlaw King focused on the boast that “…if people were impressed by the blood and gore of Braveheart, they haven’t seen nothing yet.” But what I found most promising was the line “…Chris Pine stars as Bruce, with Scots actor James Cosmo as his father.” My immediate reaction was, “Of course. Who else?”

Among his many well-known roles are several key characters in iconic Scottish-themed films and television. My personal favorites all feature him in a paternal role: Angus MacLeod in Highlander, mentor to Christopher Lambert’s Connor MacLeod; Campbell in Braveheart, father of Brendan Gleeson’s Hamish; Mr. Renton in Trainspotting, father of Ewan MacGregor’s Mark Renton; Father Kellan Ashby in Sons of Anarchy, a priest and patriarch of the Irish branch of the titular motorcycle club; and Jeor Mormont in Game of Thrones, Lord Commander of the Night’s Watch and mentor to Jon Snow. 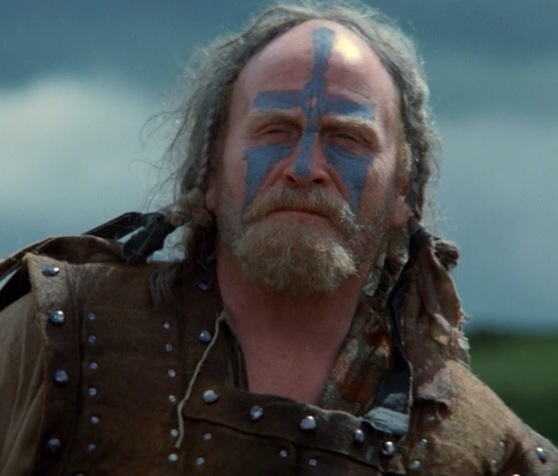 With an acting career spanning over 50 years, James Cosmo has taken roes that have shaped him into the quintessential Scottish dad.

So what traits shape James Cosmo’s characters into the perfect Kilted Dad? Campbell fights alongside his son in battle, losing a hand at the Battle of Stirling and replacing it with a ball and chain for the Battle of Falkirk. Campbell also has one of Braveheart’s best lines when he punches the man who cauterized a chest wound he received and exclaimed “That’ll wake ye up in the morning, boy!” But despite his commanding presence and gruff exterior, he’s the dad who cares deeply enough for his son in Trainspotting that he fosters Mark Renton through heroin withdrawal at home, rather than methodone treatments.

Take a Look for Yourself

As with most things you will read here, this is all just my opinion. And as Levar Burton always said in Reading Rainbow, “You don’t have to take my word for it.” Next time you’re looking for some entertainment, head over to IMDB, Look up James Cosmo, and pick something he’s been in for your next show or movie. Enjoy!