The stone throw. The sheaf toss. The hammer throw. The caber toss. These are just some of the events that happen at a Highland Games. Collectively, the heavy events probably rank as the fourth most iconic Scottish thing most non-Scots will know about (after kilts, bagpipes, and whisky – not necessarily in that order). But what most people don’t realize is the caliber of athletic prowess required to actually compete.

From the time I finished college, wherever I worked, everyone pretty much knew me as the Scottish guy in the office. Sure many coworkers, also had a Scottish heritage, but I was the one who embraced it. Translation: I was the only one with a kilt. What that meant for the most part, was that every year when the Highland Games came around and someone would hear it advertised on the radio, they would ask me if I knew about it and if I was planning to go.

Well of course I knew about it, I mean the dates had only been in my Outlook Calendar for 12 months, but I would always thank them politely for the heads up and confirm that I would indeed attend. Invariably, the next question would always be, “Do you compete?”

Anyone who knows me, knows that I’m a big guy. The typical Highland athlete is a big guy too, but I’ll be the first to admit that I’m big in all the wrong ways. Highland Athletes are first and foremost strength athletes and many of them would be at home in a World’s Strongest Man competition – and by that I mean that you will not see anyone with a lean runner’s build out on the athletic field.

Anyone who knows me, knows that I am a big guy. But I’ll be the first to admit that I’m big in all the wrong ways.

So what does it take to compete? Let’s take the Heavy Weight event for an example, where the object is to throw a 56# weight for distance. The North American record for that event currently stands at 49′ 10″! How far can you throw a 56# weight? Another event has athletes throwing the same weight up and over a bar (without getting hit by it on the way back down). The height record stands at 19′ 1″. 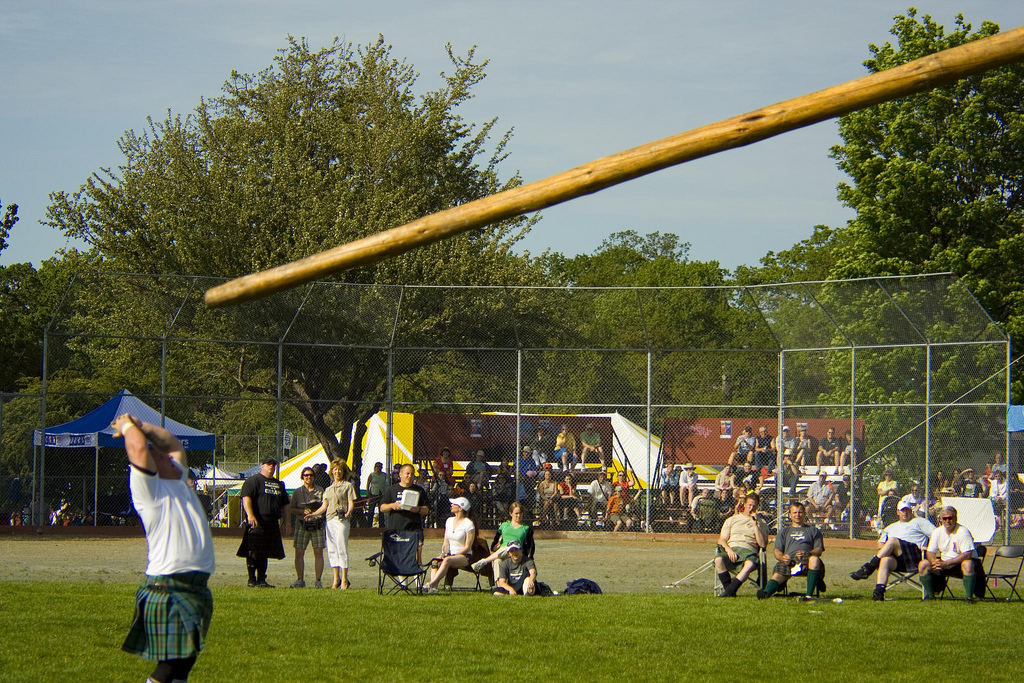 Another event put in perspective is the caber toss where the object is to flip a caber (imagine a telephone pole 19′ 6″ in length weighing an average of 175#) end over end. To make matters worse, the real measurement isn’t who can do it, but the competition is won by the athlete who keeps it the straightest while flipping it and having it land closest to the 12:00 o’clock position relative to the throw.

So Do I Compete?

My answer is a resounding “No.” I’m not even in the same class as the amateur Highland athletes. But I love to watch the events that are a staple of every Highland Games throughout the world.

What I can do is, however, is imitate most of the events – for fun and fitness of course. My goal is to work copies of the events into my personal fitness routine. To copy the events with lighter, manageable weights to build my own strength and to add a little variety to my weight loss routine. You can too. Be on the lookout for future posts about Highland Athletics themed workouts.