It had been a while since my last post, but I have been busy cycling.  I can say that I have made some great progress in the preparations for my Trotternish Cycling Trek during my trip to Scotland this October. I’ve hit two different distance milestones the past week, and had some setbacks as well. The most important thing, however, is that I followed KILTED! Principle #7 and didn’t quit when I felt like it (except when safety meant I had to, of course). 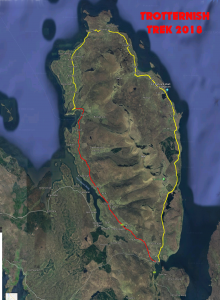 The day after my last update, I decided to push ahead and reached a maximum ride of 30.04 miles. This hit my goal for June 1st a full 2 weeks early. Furthermore, this distance will push me well around the point of the Trotternish peninsula on my way back towards Portree. After a few shorter rides and some setbacks (see below) I increased that maximum to 32.4 miles yesterday which would bring me to the descent to the harbor at Uig.

Also noteworthy, is that in the 11 days since my last update I have I have ridden on 10 of them. Even though I skipped riding last Sunday (under the assumption that I needed a recovery day after the long ride) I have logged over 10 miles every day since then. After this morning’s ride, I have also reached a total of over 150 miles for those 10 days of cycling.

I have been dealing with a bit of pain since the long 30-mile ride – but not where you might think. The obvious guess for pain from a long ride is from interacting with the seat, but I quickly discovered the solution for that. If you want to get serious about cycling, I recommend investing in a pair of cycling shorts because of their special padding for your “undercarriage” (called a chamois). They were uncomfortable at first, until I discovered that the biggest trick with bike shorts is that they work best without underwear. Your underwear can bunch up and cause chafing, but the bike shorts will not.

My pain has been in the form of mild numbness throughout the hands and upper back pain. Both are symptoms of my less than perfect riding posture – leaning too far forward and thus putting too much weight on my hands and keeping my shoulders hunched up while riding in that position. The hand numbness is minor and goes away shortly after my rides. But the back pain was significant, especially in the mornings, for the first couple days after the 30-miles.

The short-term solution for both is to sit more upright in the saddle thus relieving pressure on the upper back and on the hands. Attempting this for the past two days of riding has almost eliminated the back pain. A longer-term solution will be to improve my core strength, so that it will bear more of the weight of holding up my upper body. Continuing to lose weight will be important too, as there will be less for the core to hold up and thus less pressure onto the handle bars.

Another potential problem has been the heavy rains we experienced here mid-week. We, and especially our lawns really needed it, but it was a potential inhibitor for rides. Fortunately, I chose to follow through with KILTED! Principle #7 and ride rain or shine. Most days this equated to rising in a sprinkle, but Thursday involved riding through the height of the downpour. I was soaked through within the first mile. My iPhone case got water in it, preventing me from using the touch screen until I could dry it out. Visibility was trickier at times. But I pushed through and I logged in 11 miles.

Then Friday, after setting out to repeat a 30-mile ride, my my front tire developed a big bubble under the tread around mile 8. I pulled over, did some research on Google which basically said, “no big deal, you can go another 20 miles if the tube holds.” I made it maybe another 100 yards before I heard a “pop” and so I sent my request for pickup and made my way to Wal-Mart which was only about ¼ mile away. Once home I examined the tire, and all still seemed in order and it seemed to be holding air, so I rode another 2 trips totaling 17 miles and staying close to the neighborhood in case it did develop problems.

Saturday morning I prepped for another attempt of the 30-mile ride I had started Friday, but the tire went flat in the first half mile. So, I walked home and took a trip to the bike shop. One new tube and two new tires later (both were the originals for this bike and over 10 years old so two was probably the best choice). I was finally ready to roll and I salvaged the day with an 11-miler. Yesterday, I finally managed the break the 30 mark again with 32.46 and added another 10.4 this morning.

I have gotten more consistent with my cycling, logging rides 10 of the last 11 days. Hopefully this consistency will help keep me in riding shape while not stressing me too much on too frequent long rides. I have also found some exercises which are supposed to help with the upper back pain. A chiropractor writing about cycling injuries suggests elbow presses and reverse shoulder shrugs as the solution.

Revere Shoulder Shrugs: Shrug your shoulders up to your ears and then roll them backwards and down again. Be sure that you are rolling backwards rather than forwards as the forward motion will not achieve enough contraction of the upper back to be effective.

YouTube is full of examples of varying exercises which all bear these names but do not match the above descriptions. I will be trying both exercises over the next week or two and, if successful in relieving pain, I will post a video showing how I do them.