Officially recognized in the United States since 1998, Tartan Day is a celebration of Scottish Heritage observed throughout the US and Canada. It is celebrated on April 6th to commemorate the signing of the Declaration of Arbroath, a Scottish declaration of independence signed in 1320. Australia celebrates a similar International Tartan Day on July 1st, commemorating the repeal of the Proscription Act in 1747.

Tartan patterns are made by weaving alternating bands of different colors at right angles to each other. The same pattern or thread count, known as a sett, is used both the warp and weft (vertically and horizontally) to create a recurring pattern of lines and boxes.

The term plaid comes from the Gaelic word meaning blanket. The original version of the kilt, the belted plaid, is essentially a large blanket folded into pleats and gathered at the waist with a belt. Since these blankets were commonly made from tartan patterns, the term plaid came to be used for the tartan pattern.

Tartan cloth has been found worldwide dating as far back as 3000 BC, but the earliest known surviving examples from Scotland only date to the third or fourth century AD. For centuries in Scotland, materials were hand woven locally, and the patterns were most likely indicative of personal preference and the local availability of dyes.

Only after commercial weavers began producing tartan by the end of the 18th century did the concept of standardized tartans begin. William Wilson & Sons of Bannockburn was the largest such manufacturer as the sole supplier for the Highland regiments and their early pattern books only listed numbers for each pattern. By 1819, only about 100 of their 250 available patterns had associated names. Therefore, it is widely accepted that most modern tartans and their clan associations are of 19th century origin.

Today, tartan is synonymous with clans with each clan having one or more distinct (and frequently unique) patterns which have their setts registered with the Lord Lyon, the supreme authority for heraldry and arms in Scotland.

Most clans will recognize two basic tartans: a dress pattern and a hunting pattern. Dress patterns will typically make use of bright colors while hunting patterns will use darker ones or more earthy tones, a sort of tartan camouflage pattern (hence the name hunting tartan). Both of those patterns can be produced in 3 different varieties through manipulation of the dying process. “Modern” tartans have the darkest or boldest colors resulting from the modern chemical dyes. “Ancient” tartans are dyed to have a more faded appearance, emulating the original natural dyes used for the wool. Finally, “Weathered” or “Muted” tartans are made by interspersing brown or grey threads into the sett and are thought to most closely represent the appearance of pre-19th century tartan patterns which were produced with all natural dyes.

These six tartans pictured above all belong to the Clan MacNicol. The two in the center are their modern dress (red) and modern hunting (blue/green) patterns. Moving away from the center, next comes the ancient dress (orange) and ancient hunting (lighter blue/green). On the ends are the weathered dress and weathered hunting. Close examination of the tartans will show that the three hunting tartans have an identical pattern with the only difference being the variation in the shade of the dyes.

Following the Battle of Culloden in 1746, the last rebellion of the Stuart sympathizers against the Hanoverian monarchy, Jacobite supporters, mostly Highlanders, were hunted down and either arrested or executed. Seeking to reduce the threat of another uprising supported by the clans, parliament enacted of legislation designed break the clans and eliminate their underlying culture.

The Act of Proscription 1746 reinforced previous Disarming Acts and added the Dress Act. The Disarming Act had been passed in 1716 after the first Jacobite rising and outlawed Highlanders to have “in his or their custody, use, or bear, broad sword or target, poignard, whinger, or durk, side pistol, gun, or other warlike weapon.” Further details of the disarming Act outline the procedures and authorized parties for collection of arms. The Dress Act shows that parliament thought that simply confiscating weapons was not enough and attacked what they thought to be the chief symbol of the clans – kilts and tartans. The Dress Act reads:

From and after the first day of August, one thousand seven hundred and forty seven, no Man or Boy, within that part of Great Britain called Scotland, other than such as shall be employed as Officers and Soldiers in His Majesty’s Forces, shall, on any pretence whatsoever wear or put on the Clothes commonly called Highland Clothes (that is to say) the Plaid, Philabeg, or little Kilt, Trowse, Shoulder Belts, or any part whatsoever of what peculiarly belongs to the Highland Garb; and that no Tartan, or party-coloured Plaid or Stuff shall be used for Great Coats, or for Upper Coats; and if such Person shall… wear or put on the aforesaid Garments, or any part of them, every such person so offending… shall suffer imprisonment, without Bail, during the space of Six Months, and no longer; and that being convicted for a second Offence before a Court of Justiciary, or at the Circuits, shall be liable to be transported to any of His Majesty’s Plantations beyond the Seas, there to remain for the space of Seven Years.

The Proscription Act was enacted based on the belief that the tartan patterns were indicative of clan loyalties. However, there is little antiquarian evidence that specific tartan patterns, known as setts, were exclusive to specific clans or families. Rather, they were more likely indicative of the regional availability of dyes where the fabric was woven. Therefore, clans may have worn different patterns or colors of plaids by default of their varied geography, but not through any tradition or regulation as is managed by the Court of the Lord Lyon for modern tartan setts. Although the Dress Act was repealed in 1782, a generation had passed and the damage was done. Traditional tartan patterns as they existed were mostly lost and new ones created by the mills producing tartan once it came back into vogue.

The Declaration of Arbroath

The Declaration of Arbroath was written during the long war for Scottish independence from England. When King Alexander III died in 1296, Scotland was left without an heir. Edward I of England was invited to help arbitrate the succession, but he used the invitation to revive his claims of overlordship of Scotland. When the Scots resisted, he invaded.

As popularized in Braveheart, William Wallace defeated the English at the Battle of Stirling Bridge, but the English campaign continued unabated and the Pope recognized English overlordship in 1305. Robert the Bruce killed (perhaps murdered) John Comyn in Greyfriars Church in 1306 causing him to be excommunicated by the Pope. But Robert claimed the crown and continued the fight against England. In 1314 he defeated the English army under Edward II at Bannockburn, but contrary to the closing scene of Braveheart, the war was not over since England refused to recognize the independence of Scotland or Robert the Bruce as the king.

By 1320 Pope John XXII had excommunicated Robert the Bruce again (actually he re-imposed previous excommunications, because Robert had never accepted the original 1306 excommunication nor another one in 1308), along with three Scottish bishops who had defied papal efforts to secure a truce between the two nations. The Scots mounted a diplomatic effort including a letter from Robert the Bruce to the Pope, a letter from the excommunicated bishops to the Pope, and the Declaration of Arbroath, which is the only document of the 3 to survive. 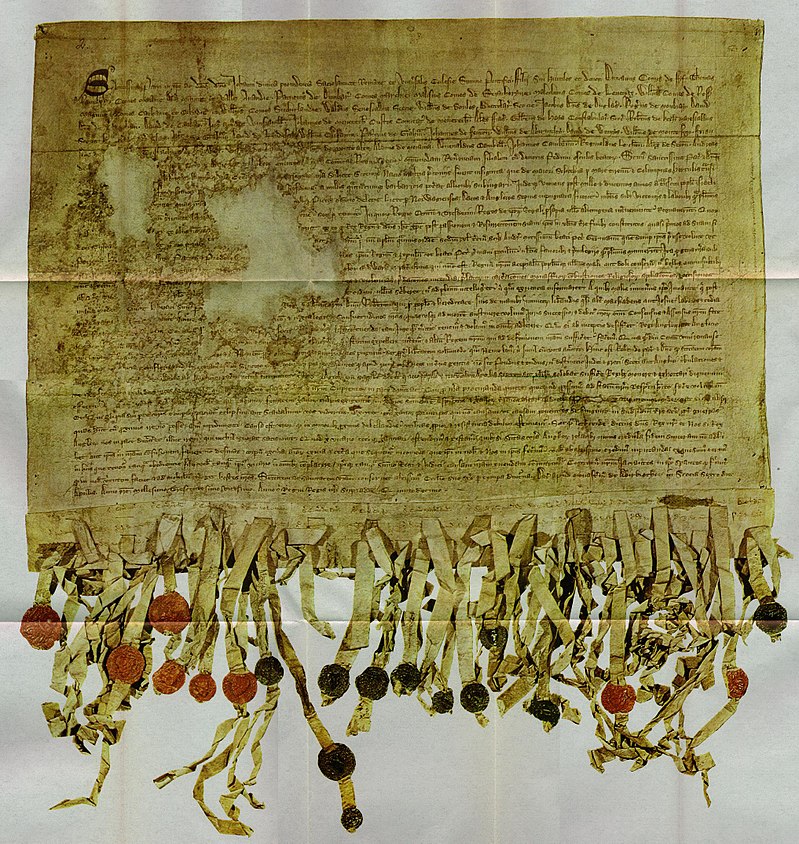 The declaration was an open letter to the Pope signed by at least 38 and probably as many as 50 Scottish nobles.  It declares that Scotland is an independent sovereign nation, that is had been such longer than England, that Edward I had unjustly attacked Scotland, that Scotland had a right to defend itself with military force, that Robert the Bruce had defended Scotland from the attacks of Edward I, and called for the lifting of Robert’s excommunication. Furthermore, the Declaration states that the independence of Scotland is the prerogative of the Scottish people and that the nobility would choose a new king if Robert the Bruce failed to maintain Scotland’s independence. The concept of sovereignty rising from the people is what leads many to believe that the Declaration of Arbroath was a model for the US Declaration of Independence.

The most famous and most quoted section of the Declaration of Arbroath reads:

“As long as but a hundred of us remain alive, never will we on any conditions be brought under English rule. For we fight not for glory, nor riches, nor honours, but for Freedom alone, which no good man gives up except with his life.”

Put on some tartan, and enjoy Tartan Day!