Scotland, Six Days in a Nutshell

The second week of the trip was a little less eventful than the first. In hindsight, I would have skipped much of what I did after Iona and traded it out for more touring in the Western Isles. So, in a whirwind summary, here’s what I did with the rest of the trip:

The main goal for Thursday was to make my way from Oban to Perth which would be the base of operations for most of the rest of my time in Scotland.  I was also hoping to see several key sites along the way. Unfortunately, Dunstaffnage Castle is closed on Thursdays and Kilchurn Castle closed for the season on October 1st. I had also wanted to make a side trip to Tomnadashan Mine but given the hike it would take and the lack of a certain prop for photos (true fans will get this reference) I skipped this stop.

I did visit the Scottish Crannog Centre on Loch Tay, which was the one site I had been hoping to visit since graduate school. Crannogs are a style of lake dwellings unique to Iron Age Scotland. Round houses built on pilings driven into the lake bed, they allowed for defense, waterborne communication, and they did not take up a footprint on the limited amount of farmable land in the area. The Centre features a reconstructed Crannog as well as Iron Age craft displays run by costumed interpreters. A small museum at the site features the history of the reconstruction and Iron Age finds from Loch Tay including original timbers from one of the crannogs excavated at the site. 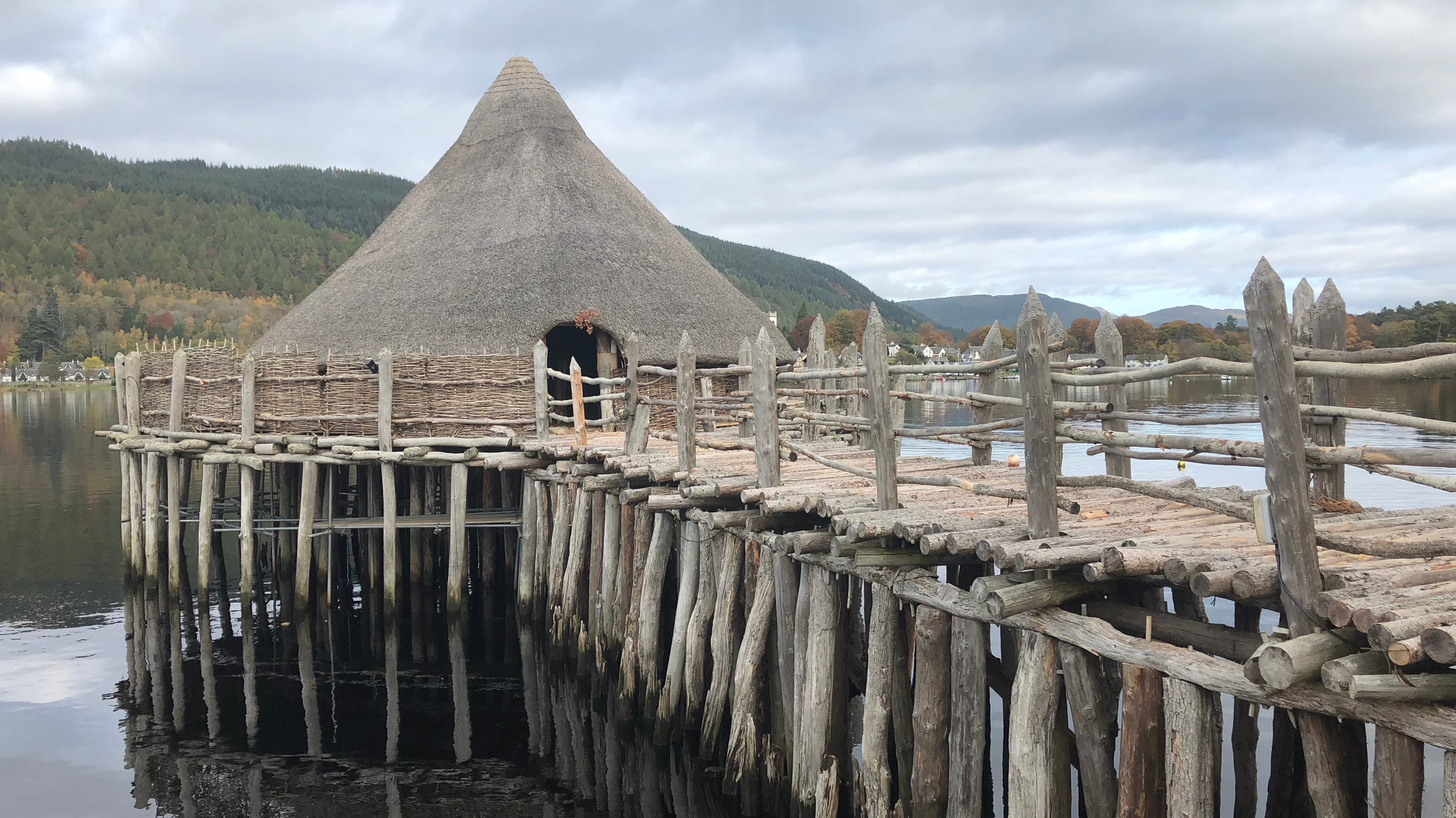 After the Crannog Centre, I continued to Perth where I checked into my B&B and then wandered around a little bit to get a feel for the city since I had never visited before. My first impression is that I can’t imagine there being such a high concentration of barbers and hairdressers anywhere else in the world. Some streets must have had 5 hair stylists on the same side of the same block!

Friday was my day to spend time in and around Perth. I started at the Black Watch Museum celebrating the famed 42nd Highland Regiment known as the Black Watch. This was the best stop of the day and one I would highly recommend making the trip to Perth for. Next, I proceeded down the street to the Perth Museum and Art Gallery, mainly due to the free admission. Covering mostly the city and area around Perth, my overall impressions is that it is a rather small museum for the apparent size of the building. Finally, I walked across the river and made the two-mile journey on foot to Scone Palace, the traditional crowning place for Scottish Kings. Overall impression here is that Scone can be avoided – it has the highest admission fee of any site I visited on the whole trip and, unless you want to see furniture named for kings and queens or faded and worn tapestries, it doesn’t offer the visitor much.

I had originally planned to visit Glasgow again on Saturday to see the Kelvingrove Museum, tour the University where I went to grad school, and to end the night with an ice hockey game since Glasgow has a team. However, construction on the rail lines meant that the train ride that takes a little over an hour was replaced by a bus ride of almost 3 hours. I instead decided to go to Edinburgh for the day. I toured the National Museum of Scotland which is literally loaded with exhibits and could take an entire day to tour properly. I spent the majority of the day traversing the halls of Scottish history and archaeology, as well as the newer galleries on science, technology and the natural world. After leaving the museum, I wandered the Royal mile shops for a few souvenirs for the family and then noticed that I had a half hour left to make it to the National Gallery. In a whirlwind tour of the National Gallery I say several Rembrandts, some of the Dutch Masters, and the famous Scottish painting, The Monarch of the Glen.

Since my flight home departed from Inverness early afternoon on Monday, Sunday was my day to make my way back up to Inverness. Rather than head straight north, I decided to circle the east coast for a while to visit two key sites of interest. First I went to Arbroath Abbey the traditional origin of the Declaration of Arbroath, Scotland’s 1320 declaration of independence from England. The declaration was a letter to the Pope signed by Scottish Bishops and nobles outlining their case for the independence from England. Its most famous lines read:

“As long as but a hundred of us remain alive, never will we on any conditions be brought under English rule. It is in truth not for glory, nor riches, nor honours, that we are fighting, but for freedom – for that alone, which no honest man gives up but with life itself.”

Before continuing on to Inverness, I made the trip to Dunottar Castle which is also highly recommended. Dunottar’s ruins date from the 15th – 16th centuries and played a prominent role as the hiding place of Scotland’s Crown Jewels during the Cromwellian invasions, as well as in the later Jacobite uprisings. One of Scotland’s most picturesque ruins, the castle grounds are spread over 3.5 acres of a headland surrounded on all sides by cliffs that drop 50 meters to the North Sea. A narrow strip of land joins the headland to the mainland with only a narrow path allowing access to the gatehouse.

I made a quick trip to Clava Cairns in the morning before making my way to the airport for an 11:00 AM check in. A quick flight to Amsterdam brought me to the beginning of an 18-hour layover at Schiphol Airport. Not content to just hang around and watch people for that long, I decided it was time to enter the Netherlands and see as much of Amsterdam as I could with the time (a lot) and daylight (not much) allowed.  I arrived at Centraal Station from the Airport around 4:30 and unfortunately most of the city’s museums and non-vice-centered attractions closed at 5:00 PM. But my return train ticket was good until 4:00 AM, so I was determined to wander the city to at least take in as much architecture as I could. I eventually stumbled into the Red Light District which I can say is a trip to wander through. There is no semblance of the seediness you might expect and at least until 10:00 PM it is literally crawling with tourists just taking a look. Plus the police presence was very noticeable so there really wasn’t any trouble anywhere. There’s lot of architecture in Amsterdam and its great to just walk along the canals. In total, I logged over 50,000 steps that day before making the trip back to Schiphol.

I spent most of the day on the plane getting back to Atlanta, a three-hour layover there, and then the final leg to home. Including the Amsterdam layover, it had been 36 hours since checking in at the Inverness Airport. Time for some dinner and then sleep!