My Pilgrimage to Iona

The next stop on my trip was intended to be an exciting one. After over a week in Scotland, my trip to Iona was the first stop at a location I have never visited before. Famous as a site of religious pilgrimage, the tiny island of Iona is just 3 miles long and 1 mile wide, but it has been a center of Christianity since the arrival of Columba in AD 563. The monastery thrived at Iona for centuries despite repeated Viking raids beginning in AD 795. The site was expanded around 1200 when an Abbey and Nunnery were founded. Even after Scotland’s monasteries were shuttered in 1560 after the Protestant Reformation, the Abbey Church continued to function as the Cathedral of the Isles.

Iona requires effort to visit, especially for just a day trip as I chose to do, because it is an island off the coast of an island. My day started on the first ferry from Oban to Craignure on the east coast of the Isle of Mull. The drive to Fionnphort on the west coat of Mull is only 35 miles, but it is slow going because it is almost entirely single-track roads. (In case you’ve never experienced Scotland’s single lane roads, they are one lane for both directions of travel with wider pullouts for traffic to move over and allow oncoming traffic to pass.)

The ferry from Fionnphort to Iona is less than 10 minutes and runs so often the schedule lists the first 5 crossings, then “Frequently Until,” and then the late afternoon crossing. Other than special permits for residents and certain delivery drivers, there are no cars allowed on Iona which helps add to the sense of the isolation. Fortunately, there were very few tourists on the first ferry, so I was the only person at the site for my first half hour there.

Although not the Patron Saint of Scotland (that distinction belongs to St. Andrew), Saint Columba is generally credited with the conversion of much of Scotland to Christianity. Columba was born in 521 or 522 as Crimthann into the powerful Uí Néill family of Irish aristocracy. He fostered with a priest from an early age and is known to have studied at Leinster and the seminary at Clonard. He had a distinguished career in Ireland, founding two monasteries before leaving for Scotland. Although he most likely left Ireland voluntarily, it was probably due a political controversy.

His aristocratic birth gave him an advantage in his work as he was granted respect and hospitality from the rulers of Scotland’s kingdoms. He settled at Iona probably because it was already a holy site. Although it seems remote in the context of modern Scotland, but at the time it was literally at the hub of a vast sea network connecting the kingdoms in Scotland and Ireland. Iona also allowed him easy access to Dal Riata, Pictland, the Kingdom of Strathclyde, and event to Northumbria.

Columba is credited with traveling widely throughout Scotland and founding three additional monasteries, although there is evidence that many of the mass conversions attributed to him were likely done by his followers after his death. Even though he was well known for his travels throughout Scotland and the Isles, his home was always to remain at Iona where he sought to create the perfect monastic community. He is said to have filled his days with the chores of the monastery, prayer, meditation and copying manuscripts.

Columba died on June 9th, 597 but the monastery thrived after his death. It became both a center of pilgrimage and of craftsmanship with exquisite stonework and metalwork. The monks of Iona were known to excel in the creation of illuminated manuscripts, the most famous example of which is The Book of Kells. Iona’s fame was such that at least two Irish kings are known to have moved to Iona to live out their final days.

Very little remains of the original monastery and the Columban community of Iona had fallen into decline by the late 1100’s. Most of the current structures at the site originated about AD 1200 when the Lord of the Isles brought a community of Benedictine monks and Augustinian nuns to Iona. 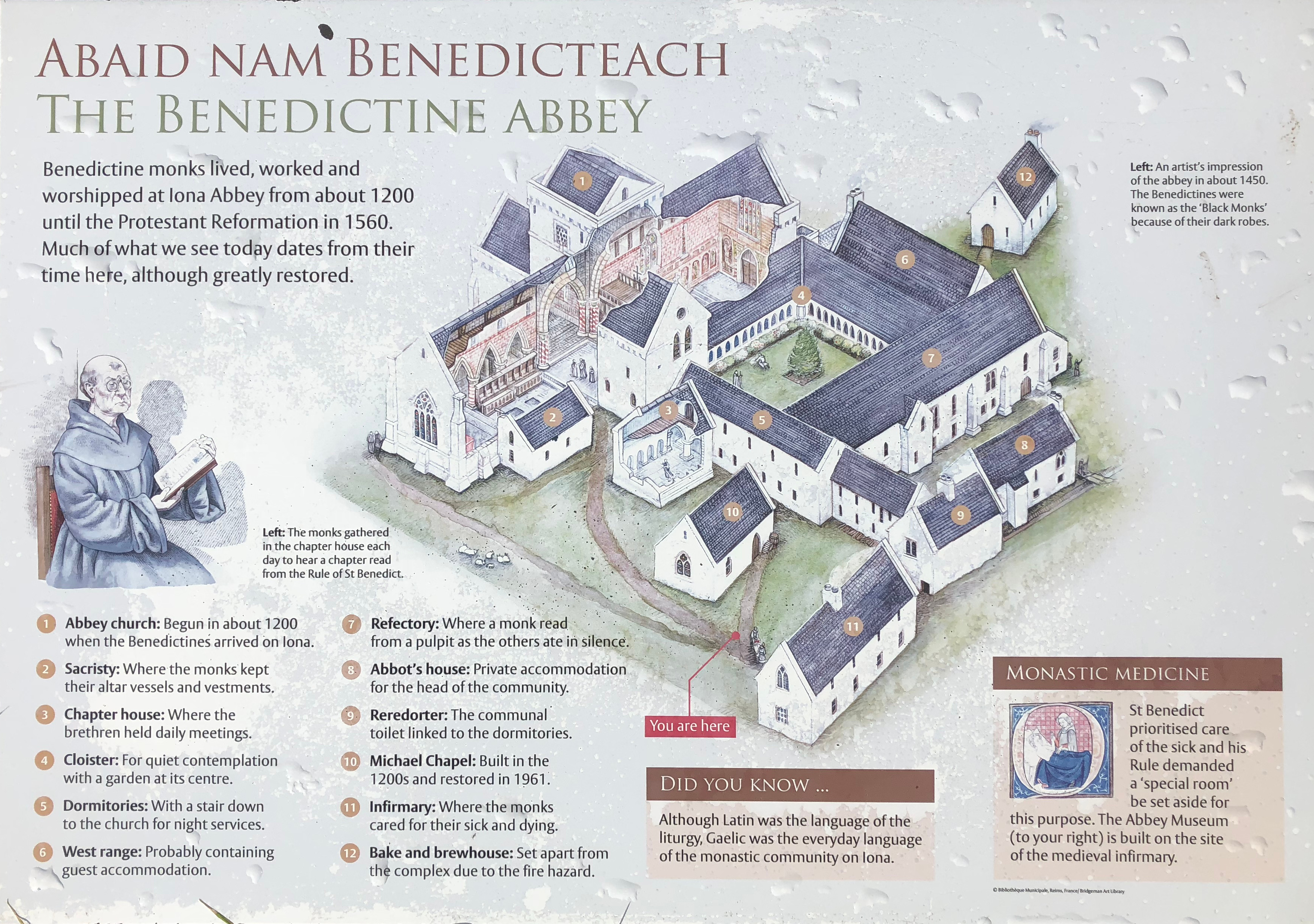 Although there has been a great deal of restoration work over the past century, most of the structures seen at the Abbey site today are original to the Benedictine Abbey. The Abbey church saw service as the Cathedral of the Isles and is still in use for services today. Adjacent to the Abbey Church (and not visible in the rendering above) was the shrine to St. Columba, where the saint’s relics were kept. Down the road from the abbey, and on the way back to the ferry terminal is the Augustinian Nunnery, one of the best preserved nunneries in the British Isles.

Although I visited Iona for historical and cultural reasons, rather than religious ones, the isolation and solitude of the place was tangible (especially before the second ferry worth of tourists arrived). Iona would have offered the ideal location for a religious retreat, for quiet contemplation, or for peaceful study.

My main reason for deciding to go to Iona is that the Abbey holds the largest collection of examples of West Highland monumental sculpture – surviving primarily grave slabs and effigies. This distinct style of carving was restricted to areas of the Diocese of the Isles and the Diocese of Argyll, which were associated with the Lordship of the Isles throughout the 14th and 15th centuries.

The most comprehensive study of these monuments is Late Medieval Monumental Sculpture in the West Highlands, published in 1977 by JWM Bannerman and KA Steer. They classified the monuments, identified several schools of craftsmanship producing them, and analyzed the decorative elements represented on them. Unfortunately, this wonderful book is long out of print and nearly impossible to find, with either access to a university library or inter-library loan usually required to get a copy.

The style of the carvings is relatively uniform with various elements standing out against a shallow-carved background in what is called a false- or flat-relief. Foliage patterns, reminiscent of Celtic interlace, appear prominently on many of the carvings. In many examples the foliage patterns surround depictions of swords or the figures of men or animals. Less commonly, a single man will be depicted as a full-size effigy carving. Distinctive West Highland galleys called birlinns, appear regularly on these monuments as they are used in the heraldry of the MacDonalds, Lords of the Isles.

The Iona monuments are Grave-slabs typically tapering towards a bottom and usually featuring a sword or miniature person as the main element supported by foliage patterns. The stone used appears to have been imported from the Loch Sween region. Iona craftsmanship represents the most detailed, the most diverse, the most numerous and the most widely distributed of the West Highland monuments. When the Lordship of the Isles was forfeited by the MacDonalds to King James IV in 1493, support for the schools of carving declined. The less common styles of carving soon disappeared, and by 1500 the font used for inscriptions and the styles of the swords changed.

The more elaborate effigy carvings, regardless of the school, would have been the most expensive to produce, and therefore would likely have been restricted to clan chiefs and the chieftains, or the upper levels of ecclesiastical society. Given their expense, these effigy slabs may have been used by several successive generations. This idea is supported by an inscription showing that one effigy marked the resting-place of at least five generations of MacKinnons.

Many of the effigies have fully sculptured heads, and the depth of the relief of the faces suggests they may have had a portrait-like level of detail. Although the effigies accurately represent the human form, they fail to transfer the same level of detail to the rest of the body. This trend is particularly noticeable on effigies with warriors holding spears, where an accurate representation of the bend of the elbow is never fully achieved. The armor depicted, a highly pointed bascinet helmet, mail aventail to protect the neck and shoulders, and a knee-length quilted surcoat called an aketon, is typical of that in use throughout the Western Highlands throughout the period. Plate armor appeared in Scotland in the late 15th and early 16th centuries, later than the rest of Europe most likely because warfare in the West Highlands was more concerned with small scale raiding than with siege warfare common to the rest of Europe.

All in all, this was a great day. If nothing else, I walked away from my visit to Iona with a better understanding of the incredible importance of sea travel in the Hebrides. I watched both sunrise and sunset from the deck of the Oban-Craignure ferry with the cold winds whipping through my hair and beard. I could imagine my ancestors on the deck of a birlinn, the West Highland evolution of the Viking longship, crossing to or from their island homes. This day if no other has led me to the decision that I will have to spend more time in the islands on my next trip to Scotland.