November 30th is the traditional feast day of St. Andrew, the patron saint of Scotland. Although he never visited Britain, his traditions have become forever ensconced in Scottish Culture.

Who was St. Andrew

St. Andrew was a fisherman from Galilee who became one of the twelve Apostles of Jesus. Andrew was involved in many of the major Biblical stories of Jesus’ life and was present at the Last Supper. It is said that he preached in Scythia along the Black Sea (modern Iran and Russia) before founding the see (seat of a bishop’s office) of Byzantium. He later preached throughout Thrace (modern Bulgaria and Turkey) and into Greece where he was martyred by crucifixion.

Tradition developed that St. Andrew was crucified on a crux decussata (a X-shaped cross also known as a saltire) rather than the traditional Latin (plus-shaped) cross at his own insistence as he deemed himself unworthy to be crucified on the same type of cross as Jesus had been. The iconography of St. Andrew being crucified on a saltire cross did not become standardized until the later Middle Ages.

St. Andrew’s remains were preserved in Patras, Greece, until the Roman Emperor Constantius II removed them to Constantinople in 357 AD. According to legend, St. Regulus, then a monk at Patras, had a dream in which he was advised to hide some of St. Andrew’s bones, which he did.  A second dream instructed him to take the bones he had hidden “to the ends of the earth” for protection and that wherever he was shipwrecked he was to build a shrine. Regulus set sail to the west with a kneecap, a humerus, three fingers, and a tooth. He was eventually shipwrecked at the site of what is now St. Andrew’s, Scotland.

A less legendary tale is that the relics of St. Andrew were brought to Britain in 597 as part of the Augustine Mission and then moved on to the site of St. Andrews in 732 by Bishop Acca of Hexham who was known to be a collector of religious relics.

According to another legend, Óengus II led an army of Picts and Scots into battle against a much larger force of Angles in 832 AD. Óengus is said to have vowed in prayer that if granted victory he would appoint Saint Andrew as the Patron Saint of Scotland. On the morning of battle white clouds forming an X shape in the sky were said to have appeared representing the crux decussata upon which Saint Andrew was crucified. Óengus and his combined force, emboldened by this apparent divine intervention, took to the field and despite being inferior in numbers were victorious. Óengus honored his pre-battle pledge and appointed Saint Andrew as the Patron Saint of Scotland. This legend also supports the origin of the flag of Scotland – the white saltire set against a blue background. 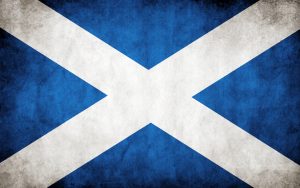 Whether the Óengus legend is to be believed or not, the 1320 Declaration of Arbroath credits Andrew with Scotland’s conversion to Christianity and declares him “the first to be an Apostle.”