There are a lot of things you can do on a bike that will elicit the comment “That’ll leave a mark!” Sometimes it’s because of an embarrassing mistake like the permanent “dent” in my shin from where I fell on top of my bike after my son tripped me with his bike (I say permanent because the indentation is still there 5 years later). Maybe the mark is from a story of survival, like the bent handlebar I keep from a wreck in college where a car ran a stop sign and hit me. Or maybe it’s just a really cool looking scar that seems worthy enough to show off.

But sometimes, something even bigger happens, leaving multiple marks. That’s what happened to me today, and boy has it left a mark.

This week, I reached 1000 cycling miles in a 2-month period!

So what kind of marks has that much activity left? Lots. I wish now that I had taken a comprehensive set of “Before” photos to use as a comparison, but unfortunately, I didn’t document everything right from the start. Below is a description of several good marks, and what will probably serve as some of my “During” photos.

Where the Rubber Meets the Road

Your feet are one of the most important contact points with your bike, transferring all your pedaling energy into the motion that makes cycling happen. Now, you can choose to wear just about any shoe for cycling, and 99 times out of a hundred, any shoe will be just fine for the average cyclists needs. But there are some drawbacks to standard shoes, primarily in that loose laces can become stuck in your chain or gears.

Because of that, lots of serious cyclists choose to buy specialized cycling shoes, and a whole industry has developed around cycling shoes. To get an idea of what’s out there, you can check out this list of the Top 20 Cycling Shoes for 2018. Don’t be shocked by the price tags reaching $400 a pair because some of them use carbon fiber technology to make a “better shoe.” 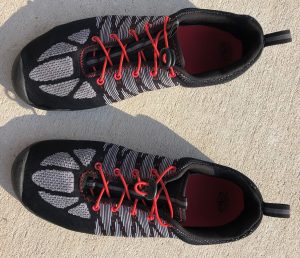 Not wanting to have my laces foul my chain (again) I also opted to get a pair of shoes specifically for cycling. However, not liking the high price tags (I hate spending $80 on a pair of Nikes that will last me 3 years) and doubtful that I would find a pair of Size 15’s, I settled for a much cheaper and totally satisfactory option: these water shoes I picked up at Walmart for the low low price of $12.48.

They’re obviously not the same quality as a $400 pair of specialized cycling shoes, but they’re definitely good enough. They don’t have laces, so they solve the first problem mentioned. They’re also lightweight and breathable so they make for a fairly comfortable ride while on the pedals. The soles are a bit thin for walking, as you can feel any rocky you happen to step on, but then again, they’re not walking shoes. So, what about leaving a mark? 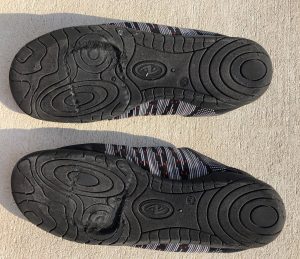 After 1000 miles in these shoes, you can see exactly where my feet rest on the pedals. In fact, I’m starting to wonder just many more miles I’ll get out of them before I wear straight through the soles. When I do, I may get something better, but given the cost and the relative durability, I probably won’t go for anything too much better.

Get that Vitamin D

I‘ve talked before about the importance of getting enough Vitamin D in KILTED! Principle #4, Trek Out, but one of the side effects of getting a lot of vitamin D is getting a tan. Many consider this a great thing and others even spend a lot of money to get the perfect tan. But when tanning is a natural side effect of outdoor activity, it may give some interesting tan lines.

In my case, I have developed a great tan line mid-thigh from the bike shorts I wear every time I ride. In addition, I have another interesting set of tan lines – from my gloves. 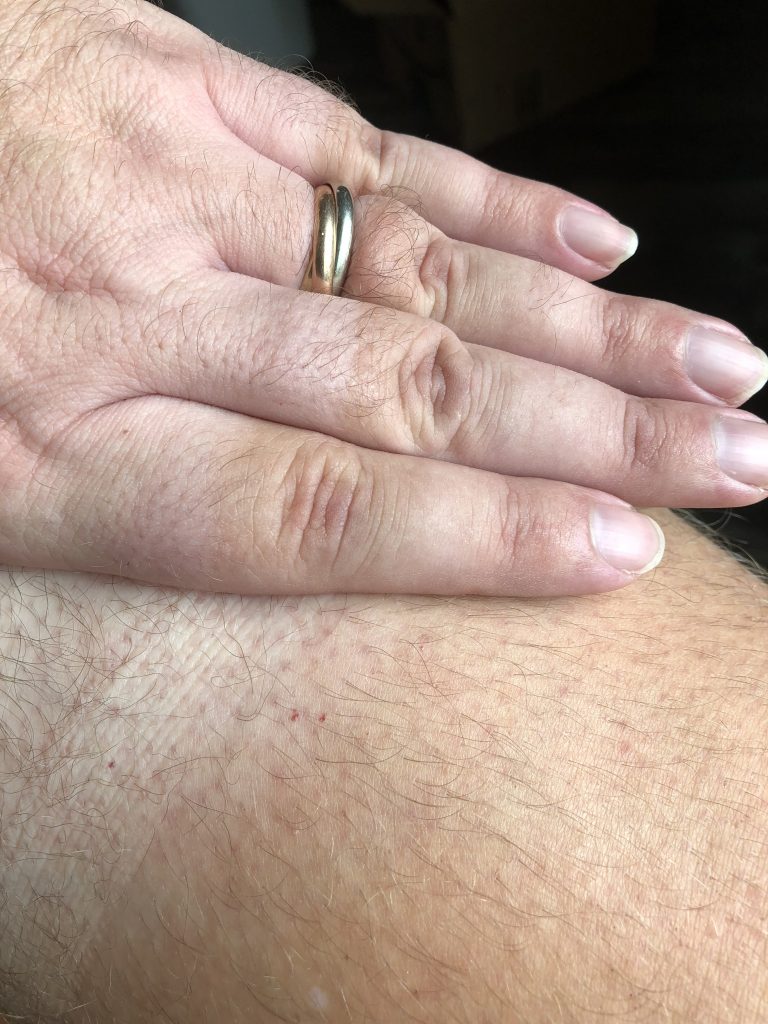 When you’re losing weight, you will likely see the numbers on the scale going down long before you see the effects on your body. And even though we talk about weight loss, because it is the number that we can more easily measure, our real goal is fat loss. Over the past 2 months, I’ve lost about 15-16 pounds (and 70 since I started last year), but how much fat is that? And how do you measure fat loss?

There are several ways to measure body fat and most of them are very complicated. You can take a lot of skin fold measurements using calipers and plugging numbers into a formula – this is one you can possibly do yourself. Then there are the complicated ones like Hydrostatic Weighing which involves being weighed while completely submerged in water and Bioelectrical Impedance which measures the time it takes for electrical impulses to travel through your body. These and other complicated methods are why we usually measure weight loss rather than fat loss.

But your eyes can also measure. They may not be as exact as the other methods, and it may take longer to see the results, but when you do, you’ll probably be surprised. That’s just what happened to me about 2 weeks ago. You may not want to see it, but below is a picture of my gut. More specifically it is an indentation in my gut now where there used to be fat. I can’t give you exact measurements, but six months ago there were several extra of pounds of fat sitting there. I’ve got the same dent now on the other side.

It’s not exact, but its fat loss that I can see!

Calf Muscles, There’s More Than One! 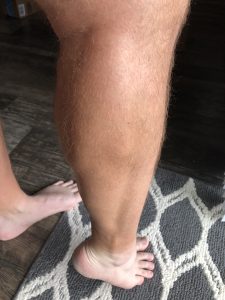 Along with the significant fat loss in my gut, I’ve also been losing smaller amounts of fat on other parts of my body. Nowhere else has that been more noticeable than on my calves. This again is something that can’t necessarily be measured, but I can see a much higher level of definition in my calves than ever before.

There’s a whole combination of things going on down there. I know I’m losing weight and fat overall, but relatively speaking it was all being stored in the gut, so how much of it really was in my lower legs? I’m also cycling a lot, but I’m not sure how much pedaling really works the calves. During most of my lifting routines, I’m doing some type of a calf raise, usually while holding a barbell. I can’t say that I’ve been focusing on them, but when all is said and done, I’ve really improved my calf definition during the last 2 months. So that’s a plus.

There’s nothing better than seeing the fruits of your labors. Seeing all your hard work pay off with some visible improvements. That’s what I finally have. The best part is that its something to grasp on and push for more. If this feels great, how much better will more be? And that’s what you use to keep going forward. At this point, I’ve lost a total of 70 pounds, bringing my weight down to around 284.

So what happens when I lose another 70 pounds and I weigh in at 214? How awesome will that be? Stick around because I hope to find out soon.