The Museum of the Isles

Near the southern tip of the Sleat Peninsula on the Isle of Skye, just north of the Armadale-Mallaig ferry terminal providing access to the mainland, is a site commonly known as the Clan Donald Centre, but officially dubbed the Armadale Castle, Gardens & Museum of the Isles. I had visited Armadale Castle many years ago (well before there was a museum on site) and initially had no real interest in going back to see the castle. But my research drew me back to the site and I was very pleased to tour the (relatively) new museum. I would even go so far as to call the Museum of the Isles one of Scotland’s hidden gems.

In the past, and perhaps still today, the site is known for the castle ruins which overlook the Sound of Sleat and the mainland. The MacDonald Chiefs had a residence here from the mid-17th century. The original mansion house was built around 1790 and part of it remains as the white buildings on the left. The main castle (on the left) was built in 1815-1820 but had fallen into ruins by the 1930’s and was mostly demolished in the 1980’s. The central portion (now roofless) was built after an 1855 fire destroyed much of the original mansion. Because of its ruinous state and restricted access, there really isn’t a reason to see the ruins more than once unless you’re a MacDonald. This time, it was the Museum and Archives that brought me to Armadale.

A Little About Museums

I have always enjoyed visiting museums and historic sites. In college I came one class short of getting a certificate in museum studies in addition to my undergraduate degrees. Since then I have taken more museum studies classes both during and after grad school. I always try to visit museums when I’m vacationing, usually more than the rest of my family can handle (on this trip to Scotland, I made it to 12 museums).

Because of my background, I tend to look at a museum with a critical eye. In addition to the content of the displays, I like to evaluate the layout, the lighting, how the visitor is intended to flow from one exhibit to the next, and even the quality of the signage. In these regards (and many others too) I feel the Museum of the Isles has hit a mark attained by few small museums and missed by many of the larger ones as well.

The Danger of Clan Museums

Since this is essentially Clan Donald’s Museum, located on the grounds of the Clan Donald Center, I think I’ll credit them for what they haven’t done. During my trips to Scotland, I could say that I have visited many clan museum collections, which are typically associated with castles. I have visited the collections of the MacLeods at Dunvegan Castle, the MacRaes at Eilaen Donan Castle, the Macleans at Duart Castle, the Keiths at Dunottar Castle, and the Murrays at Scone Palace. Most of these collections and displays seems more like a collectionof portraits and objects that just say “Hey, look at all of our expensive stuff.” Scone Palace is worse as it is the most expensive, and it is mostly “Hey, look at all this fancy furniture nobody can use anymore.” The exhibits and character of the Museum of the Isles, by contrast, is more of a museum for the Lordship of the Isles and the Hebrides themselves, than of the Clan Donald.

In Their Own Words

The museum’s website has as good of a summary of the museum and its exhibits as you can get, so I thought I’d just quote it all here before continuing with my review.

“In our award-winning Museum of the Isles you can discover the history of the Highlands and Islands through the story of Clan Donald, its most powerful clan. Six interconnecting galleries take you through 1500 years of history and culture in the area once known as the Kingdom of the Isles. A seventh gallery is dedicated to an annual changing exhibition.

“The Macdonalds – or Clan Donald – were the Lords of the Isles and sit at the heart of the history of Gaeldom. Our Museum follows their story through triumph, bloodshed and trauma from the demise of the Lordship of the Isles, through the Jacobite risings, to the sweeping cultural changes where clansmen became crofters and chiefs became landlords. We end by looking at emigration, often under duress, and the challenges of making a new life overseas.

“From bagpipes to broadswords, portraits to pamphlets, our collection brings alive this rich period of history. Wonderful portraits by Angelica Kauffmann and and Sir Henry Raeburn are on permanent show. The Gunna Breac or ‘speckled gun’, a rare 17th century firearm that belonged to the MacDonalds of Dalchosnie, is inscribed with the famous battles where the gun was reputed to have been carried, including Culloden.”

Your visit to the Museum of the Isles begins in a round room built around a ring of standing stones. The displays surrounding the circle highlight the Kingdom of Dalriada and the Rise of the Lordship of the Isles. The overriding theme of the exhibit is to impress upon the visitor that the area was dominated by seapower – and that he who controlled the seas, controlled the islands.

The next room covers the Lordship of the Isles, its ruling council, and a little about the craftsmen who supported Medieval Gaelic society. The next two rooms follow the story of story of Scottish Clanship from the time of the Lordship until after the last of the Jacobite uprisings. Exhibits feature many artifacts as well as the weapons Highlanders are known for. The final exhibits cover the crofting period and the Scottish diaspora when Scots emigrated from their homes and spread to the corners of the globe. 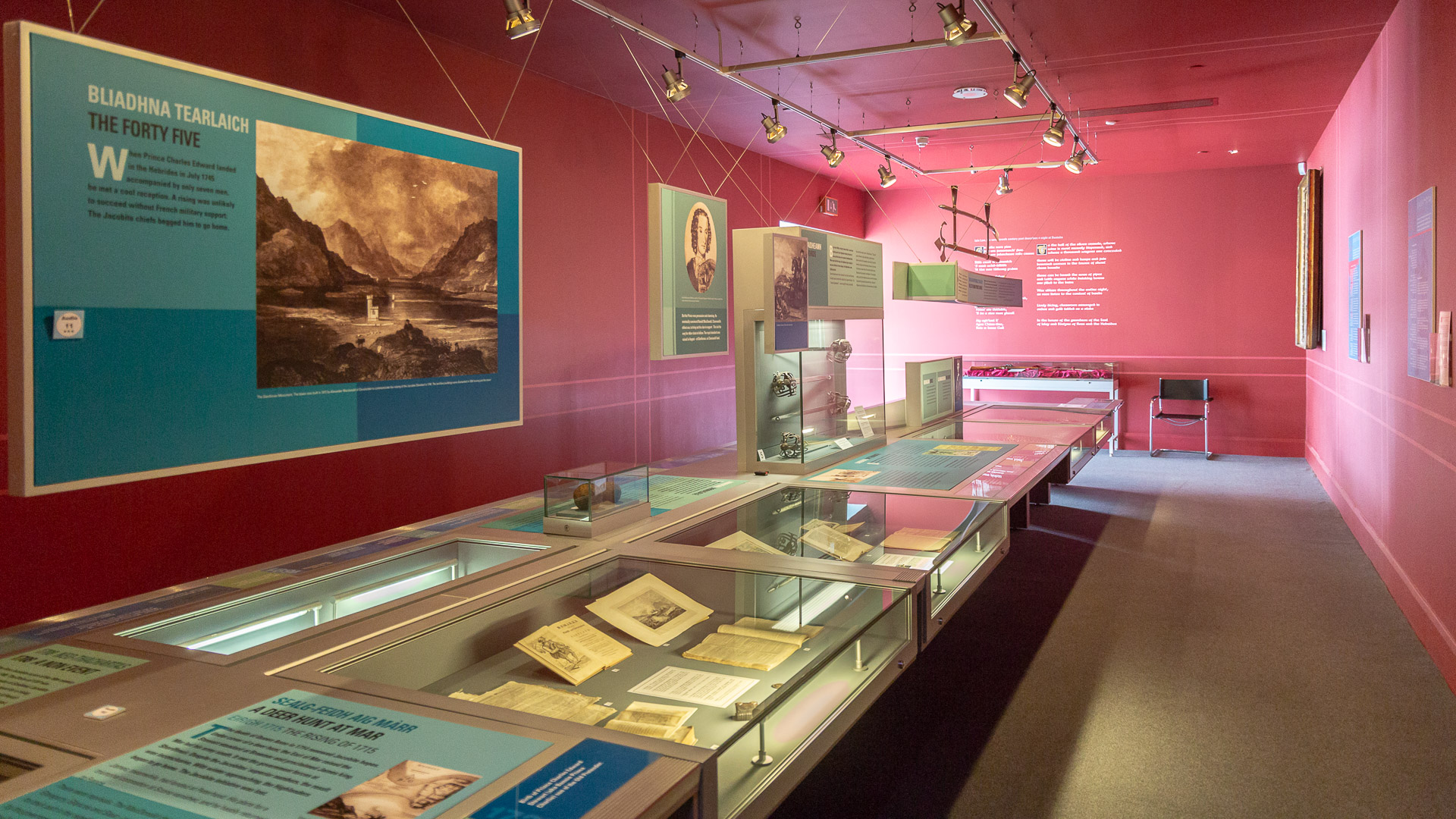 The Museum of the Isles is an amazing bonus to a visit that was originally scheduled specifically to visit the Clan Donald Archives. Through some online research, I was able to confirm that the MacDonald papers held several documents, mostly leases and some personal letters but also maps, that would be beneficial for an upcoming publication I am writing. I spent most of the day immersed in these 18th century documents looking for information I will be able to use.

The most important were a lease agreement from 1727 for my Clan’s ancestral lands, as well as some letters outlining financial difficulties being suffered just prior to my Clan Chief’s ancestors’ decision to emigrate from Skye to Australia. There’s nothing better than reading these first-hand accounts and primary sources to but the story of the Scottish diaspora into perspective.

The archives also have wonderful genealogical resources and a very helpful staff. If your family is from Skye, or even if you just want to know more about the area and its history, the staff at the archives can help point you in the right direction.

I left the Museum and Archives shortly before closing and made my way to my next stop – the Armadale Ferry Terminal for my ferry to the mainland for the drive on to Oban. I had been watching the weather all day as most of the ferries scheduled for the crossing had been cancelled due to high winds. I was scheduled for the last trip of the day which was fortunately scheduled for the bigger of the two ferries to run that route.

The ferry sailed on schedule and gave quite the bumpy ride for the 40-minute crossing to Mallaig. This trip, more than any other, shows how skilled the sailors from the Lordship of the Isles must have been to maintain their dominance over these waterways.

Once the ferry docked it was time to drive on to Oban, the busiest ferry terminal on Scotland’s west coast servicing most of the Hebridean islands, for another ferry crossing I would take the following morning.