Trekking Out in Scotland

After completing the Trotternish Trek and the Clan Gathering it was time to move on to the second phase of my trip, which was primarily for research and museum visits. But because of the scheduling of various sites I intended to visit, there would still be some down time and since I would be unable to continue my fitness routine of cycling daily for the remainder of my trip, I opted to plan a few hikes to help keep in shape.

I have previously written that I don’t run for fitness (in fact I Can’t Run), and I find just walking to be mind-numbingly boring, I tend to really enjoy a good hike. It’s possible that this doesn’t make sense, so allow me to clarify the difference (in my reckoning, not the dictionary’s) between walking and hiking. I take a walk in my neighborhood, on the sidewalk or in the street, past houses I see every day, in or near traffic. I take a hike outside of the city, away from crowds, on a path or trail, or maybe even off the trail for good measure. I put on shoes for a walk. I put on boots for a hike.

A hike can get you out and away from your routine, and therefore outside of your safety net or your comfort zone. A hike will get you out into nature, exposed to sunlight and fresh air. A hike is an escape. And a good one can keep you away for the whole day.

I had already taken one hike on my trip the day before the Trotternish Trek – I had hiked around and to the top of Ben Chracaig on the north side of Portree Harbor. This is a hike I do every time I visit Skye, as this area is owned by my Clan and is part of our ancestral homelands.

But the real gem of hiking and climbing on the Isle of Skye is the Cuillin Hills.

I have always admired the Cuillins and been daunted by the possibility of hiking and climbing among them. Taking up much of central Skye, the Cuillins are the remains of a massive volcano formed about 60 million year ago as part of the British Tertiary Igneous Province. The illustration below shows the estimated extent of the volcano with the black line showing the current peaks of the Cuillins range. The Cuillin Hills can be divided into the Black Cuillins and the Red Cuillins. The Black Hills are primarily composed of gabbro which is a dark and dense rock which is rich in iron and manganese. These hills were resistant to the glaciers and have worn into dramatic formations which are popular with climbers. The Red Hills are composed of granite and are so-called because of the color resulting from the pinkish color of the potassium feldspar they contain. These hills were less resistant to glacial erosion and resulted in rounder shapes which are more popular with hikers. 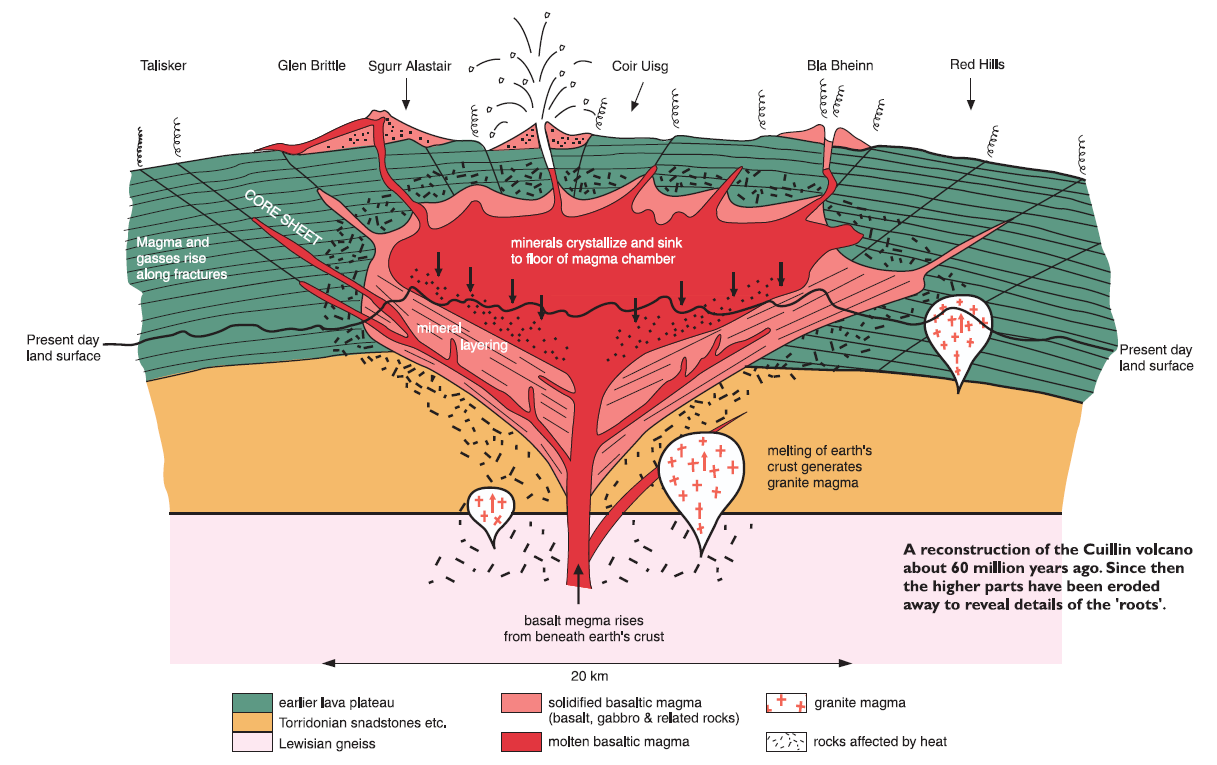 On a previous trip to Scotland about 12 years ago my wife and I both summited Ben Nevis, the highest peak in the UK at 4413 feet, but I’ll admit that I struggled for a big part of the climb. Combine that with the observation that every time I passed the Cuillins I saw climbers embarking with ropes and rappelling gear, and I had decided that any hiking or climbing them would be beyond my abilities.

Fast forward to last month when I was looking for an October 15th activity on Skye where I still had an opening between the Clan Gathering in Portree and the Archives in Armadale. Looking over the maps and hiking trails I discovered the Skye Trail which runs through the center of the Cuillins without much of the elevation change which they are famous for. After confirming with the local Portree outdoors shop and a topographic map that the Skye Trail did not involve any climbing, I felt was ready to put it in the schedule and tackle it while there.

I planned to begin at Sligachan and follow the Skye Trail for about 8 miles until I reached Loch Coruisk, returning to Sligachan before dark and then continuing on to my B&B near Armadale.

I was packed up and was ready to set off at 8:00 on Monday. After a good solid breakfast at the B&B a trip to the bank so that I could get enough cash to pay my bill, I set off for Sligachan. I parked around 10:00 and was ready to hit the trail. I had 3 liters of water, a couple apples, a bag of mixed nuts, and a can of pringles. I also had my good hiking shoes, spare socks, rain jacket and a waterproof topographic map of the Cuillins. I was ready for anything, but unfortunately not ideally prepared for the weather.

This was a valley hike, and along a rocky but well-established path so the going was rather easy. There had been a lot of rain the past couple days, so the area was fairy wet, with the streams and the river running a bit high, but that didn’t present much of a problem. The weather was quite nice for my hike, and it perfectly illustrated one of the interesting ways that weather works around mountains. Throughout the hike, heavy clouds and some rain were rolling in from the south, but it was clear to the north for almost the entirety of my hike. Although it rained intermittently for the whole day, it was never all that bad and it was usually more convenient to skip the raincoat rather than wear it.

The first 2 hours or so were smooth sailing, and there was a great feeling of solitude as there were only five other hikers I encountered throughout the day (in two groups) as well as two mountain bikers with their dog. Somewhere around three hours in, I came to the first obstacle: a river about 20 feet wide and flowing high. There are no bridges in the Cuillins so crossing involves stepping or jumping from rock to rock across the rivers. Unfortunately, the tops of some of the obvious crossing rocks were just below the surface. Wanting to keep my feet dry, I must have spent 20 minutes venturing up and downstream from the trail looking for an easier crossing. Anywhere there were islands and narrower crossings, the bank looked too high to jump. Eventually I decided to trust my balance and hope the water wasn’t high enough to flood my boots. I made the crossing without trouble, except that the water was just deep enough to seep a little into each of my boots. My feet were damp, but not wet so I pushed onward.

At the next crossing, I hit a loose rock and my right foot plunged into the water. Keep in mind that this was a mountain stream, so the water was COLD. Within another half hour, both feet were wet and cold, but I kept going because it wasn’t too bad. Even when I came to sections where the trail itself was flowing with water, I continued on, because my feet were already wet and couldn’t be getting any wetter if I came to more water.

Sometime between about 1:30 and 2:00 I came to another river crossing. This one was maybe only twelve to fifteen feet across, but there were no obvious crossing stones and it looked like it was knee deep at least. I spent a few minutes looking for a better crossing and consulted the map. I was about six miles in and had at lest two more to go before reaching my planned turn around point at Loch Coruisk. Sunset was scheduled for 6:21 PM and between admiring the scenery, taking photo breaks, and taking my time with the water crossings I didn’t think it would be possible to make it the rest of the way to Loch Coruisk and back out before dark. I made the unfortunate, but most likely wise decision to cut the hike short and start making my way back out.

The return trip was smooth and offered some of the best photo ops of my trip, including times that the sun came out from the clouds and reflected in shiny glimmers off the wet mountainsides. My feet got wetter, if that was possible, but I survived and just had to give my boots a night on the radiator at the B&B and most of the next day to dry out. Even though I didn’t reach the end of my originally planned hike, I still logged almost 12 miles and over 30,000 steps on that hike.

In retrospect, two decisions could have allowed me a quicker pace and the chance to have reached Loch Coruisk. I’ve never really been on to like hiking poles, but if I had had even one with me on this hike, it would have made the water crossings go much quicker. Just having a stick to plant and lean on would have prevented at least one or two (if not all) of the times my feet plunged into the water. Second, and more importantly, I should have brought water shoes which I could have changed into for the water crossings to keep my boot and socks dry. The worst art of it all is that I considered buying a hiking stick at the outdoors shop when I bought the topo map of the Cuillins. Worse yet, I had the water shoes in the car the whole time, I just didn’t think to bring them along on the hike.

Next time (and there will be a next time for this trail), I’ll bring both.

Although its not my favorite, I did do a lot more hiking on the last four days of the trip, it’s just that just most of it was in the cities rather than in the mountains. On Friday, October 19th I did over 23,000 steps walking in and around Perth and by walking the 5 miles to Scone Palace and back rather than driving. On Saturday, October 20th I took the train to Edinburgh and walked over 24,000 steps around the National Museum, the Royal Mile, and the National Gallery. On Sunday, October 21st I did 19,000 steps visiting Arbroath Abbey and Dunottar Castle on my way back to Inverness. And to cap off the trip, on Monday, October 22nd I did over 50,000 steps around Amsterdam during a long layover.

My feet were done for by the time I got home! They then enjoyed a couple days with very few steps.