Once again It had been a little too long since my last post, but I still been cycling.  I’m feeling great about the preparations for my Trotternish Cycling Trek for October. And once again I’ve hit distance milestones and suffered setbacks as well.

I set a couple of goals for the month of June in my last Fit First post. Here’s how I’m doing on each one of them:

I will ride all 30 days in June – I have unfortunately failed at this goal, missing two days so far. I would still be on track except that during last on Sunday’s ride I broke two more spokes (the 3rd and 4th on that wheel). Given that the wheel is 10 years old and assuming that another spoke will break soon (once one goes, more tend to follow), the cost of repairing a 5th spoke would put the cost of repairs on that wheel alone at the cost of a new wheel. So I made the decision to order a heavier, more durable replacement and didn’t ride with the damaged wheel while waiting for the new one. So, I have only ridden 21 of the 23 days so far this month.

I will ride at least 12 miles each day in June – OK, so I skipped riding two days, so I obviously didn’t ride 12 on those days. But how have I done on the rest? Of the remaining 21 days, I exceeded 12 miles on 19 of them. Furthermore, 5 of those 19 days I exceeded 20 miles. So not perfect, but almost there. Also, one of the two days I did not exceed 12 miles was when I had my 2nd broken spoke repaired and wasn’t able to start riding until 11:30 when the heat was getting to be too much (our heat index here has been exceeding 100 in the afternoon most of this week). 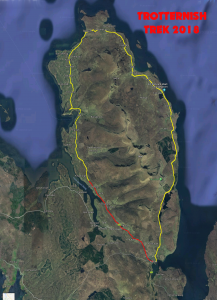 I will have at least one ride exceeding 40 miles – Good news here. I rode a total of 41.25 miles on the 10th, although it was not all in one ride. I started out a little later than planned and was exhausted by the time I hit 35 miles when it hit the mid 90’s, so I swung home and ended the ride at 38 miles. For good measure I went back out that evening with he family and did another 3.25 so I could say that I had exceeded 40, but I wasn’t happy with it.

The following Sunday, after pushing the daily rides up to 15 miles each, I set out (earlier in the day) to beat 40 miles in a single ride. I did much, much better. In fact, when I hit 38 I planned to pass my turn towards home and do another 5 or so, but after confirming the broken spokes headed home and cut it at 40.16 miles. In addition to hitting the mark, I felt a lot better with this ride. I felt like my pace was a lot more solid throughout the ride, and while I took 6 stops for water the previous week, I only took 3 stops along the way this time.

I will ride a total of 450 miles in June – More good news. Although I haven’t finished it yet, I am solidly on track to hit this mark. So far I am at 375 miles for the month (25 more than May’s total), and if I continue with the 15 miles a day for the rest of the month I will hit at least 480. Also, this is right in line with my goal for the Great Cycle Challenge where I am currently ranked 98th in the state of Florida for total distance ridden (but I was up to 73rd in Florida before taking the 2 days off and would be 78th if I had logged 15 miles each of those days).

The only setback so far this month has been the 2 days of downtime waiting for my new wheel to arrive. Not only did it stop me from riding for those 2 days, but the first two days back in the saddle were pretty rough. I’m not sure if it was my muscles tightening up during the downtime, thee new wheel being heavier than the old one, my brakes being a little too tight on the new wheel, or stringing my chain up on the wrong gear when reattaching the new wheel, but I was dragging for the first 2 rides back on after the break. After the second tough ride, I adjusted my rear brake cables and the chain and everything has seemed back to normal for the past 2 days. The only unfortunate thing is that I don’t know what the actual cause was, so I can be properly prepared for it in the future.

At this point I don’t plan to make any major training adjustments. Everything seems to be working well now pushing for 15 mile rides each day and then a major ride on Sundays. I plan to keep this up as best as I can next month, adding a few miles on each of the Sunday rides. If I do this, I’m hoping that I will work up to a 50-mile ride by the end of July.

July will, however, present a couple of challenges. In general, I hope to keep up the daily rides, but I will also be going away for a week with my son to Boy Scout Summer Camp. I may have a chance to get out on one of the camp’s mountain bikes, but I doubt there will be any place for road riding in the area, so I will likely have to take a week off from the riding. If nothing else, this will give me a chance to see if the sluggish days after my two days off was because of not using the muscles or because of the mechanical differences with the bike.

If I determine that it’s a muscle issue, I’ll have to prep with breaks before my long rides throughout September. When I go to Scotland, I’ll have 4 days without riding before the Trotternish ride, so I may have to plan a warm-up ride the day before. The good news is, if I can get up to 50 miles by the end of July, then I can push to 60 in August (to allow for some side trips in Scotland), then I’ll still have September to play with downtime before the big rides.

The only other issue creeping into he back of my mind is that Scotland, and especially the Trotternish peninsula, is not known for being as flat as Florida. I will need to find some topography so I can begin practicing on hills. If I don’t, this could be the silent killer when I do get to Scotland…