The world, and especially TV commercials and infomercials are full of plans, programs, and theories to help you lose weight. Everyone knows about Weight Watchers, the Paleo Diet, and whatever else Dr. OZ is accepting money to support this week. I call these traps, because you can get so caught up in the details of a trendy diet plan that you fail to make it work for you. Or maybe, reading and learning the rules can be so daunting or so involved that you never get a full understanding and you fail to even start the diet.

One of the most basic forms of diet plans is counting calories, and I have seen many different plans that are variations of this idea. In my opinion these have some very fundamental flaws.

Calorie counting is based on the recommended daily calorie intake for the average human. So where calorie counting may for an average person, who is this average human? Does the average person work in a physical job like construction and burn through 3000 calories a day? How about a the food intake of Eddie Hall (one of my favorites), the reigning World’s Strongest Man, who consumes a whopping 10,000 calories per day while training. Sources differ, but average to around 2000-2500 for men and 1800-2000 for women. So what does that mean? How much food can you really get for 2000 calories?

An apple or a banana have about 100 calories. One cup of chicken (and who really measures meat by the cup?) has 335 calories. A Big Mac from McDonalds (at least I don’t eat there anymore) has 563 calories, but a Wendy’s Classic Double (which I do still eat occasionally) has 810 calories. When you make that a meal with medium fries and a medium Sprite, the total comes up to 1540 calories, or 75% of the food I’m supposedly allowed in a day! When I used to go large on that combo it would come in at 1730 calories.

In other words, counting individual calories could drive you crazy.

I can’t remember the name, but I remember a diet counting plan from many years ago that was based around a wallet and different colored cards. The idea was that when you ate meat you moved a specific colored card (red I think) from one side of the wallet to the other. When you had moved all the cards of a specific color, you couldn’t have any more of that type of food for the day.

And speaking of ounces, my mother-in-law is on a diet plan where she is weighing all her food. Don’t get me wrong, because it seems to be working for her, but I’d be hard pressed to do it. Weighing out 2 ounces of fruit for breakfast, making sure you cut off just a little more chicken to get that piece down to 3 ounces for dinner… To me it’s like buying the Weight Watchers microwave meals and having to eat 3 of them to get close to full so you don’t have to scrounge for more food in an hour.

I think it’s safe to assume that everyone has heard of the Stone Age style diets. The premise of stone age diets is that (in my words) our paleolithic (more commonly known as the stone age) ancestors living between 2.5 million and 10,000 years ago were healthier than we are so we should only eat the foods available to them. On the surface, this means eating lots of meats and avoiding processed foods. Not such a bad idea in theory.

According to Robb Wolf, one of the world’s leading experts on Paleolithic nutrition (I’ll say self-proclaimed because he doesn’t list any credentials in anthropology or archaeology – the fields that deal with paleolithic man), “[Stone Age diets are] the healthiest way you can eat because it is the ONLY nutritional approach that works with your genetics to help you stay lean, strong and energetic!” He promotes eating a variety of proteins from many different animal sources and states that “An often-overlooked piece of the stone age diet in popular culture is an over-reliance on standard cuts of meat, at the expense of organ meats…” I’ll counter that advice with the diagnoses of the 3 doctors who blamed organ meats which were quite popular on my dad’s side of the family (liver, gizzards, venison heart, and all that other good stuff) for the gastro-esophageal cancer that claimed my dad, an aunt, and an uncle.

A 2013 Scientific American article refutes the worth of the stone age diet plans, by pointing out that we can never truly eat like our ancestors because, as we have evolved over the centuries and millennia, so has the food available for us to eat. Fred Flintstone could have walked down to the local supermarket and bought a mammoth steak, but where are you going to find one? The article also points out that, “in its most traditional form, [Stone Age diets] prohibit any kind of food unavailable to stone age hunter–gatherers, including dairy rich in calcium, grains replete with fiber, and vitamins and legumes packed with protein.” 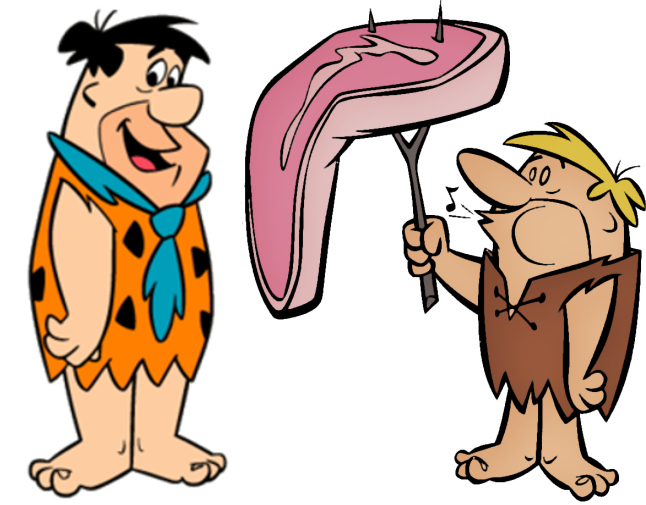 More lenient interpretations of the Stone Age diets call for the modern equivalents of paleolithic foods, namely game. There are many advantages to including more wild game in your diet, namely that it is generally less fatty and healthier than beef. But unless you are trekking out and hunting it yourself, game can be prohibitively expensive from the average American. The average supermarket doesn’t carry venison, and when my supermarket does have pheasant available, it runs almost 3 times the price of chicken.

One of my favorites (that’s a sarcastic favorite), and one which shows many of the pitfalls of these type of diet plans it is a Celebrity Weight Loss Expert 3 Month Transmutation (that’s not the real name of course, but you get the idea). I had been hearing about the “3 Month Transmutation” on the radio for months before I started to consider it and examine it in greater detail. A local radio personality spoke daily about how he lost over 100 pounds and 38 inches in 3 months on the Celebrity Weight Loss Expert plan. Those are the kind of results we all want, right. I even attended his “free steak lunch” presentation at the local Ruth’s Chris Steakhouse (which was basically a live infomercial).

During the live infomercial, the Celebrity Weight Loss Expert told the assembled crowd of probably 80 or so people about how he was once just like us, until he did all the research (not lab work, but he read medical research) on what makes people healthy and learned how to “properly hydrate our cells,” to “reset” them, so that our “mitochondria can fire,” and reset us to our “genetic blueprint.” (from the details, it seems like some variation of no sugar, no flour diet.) The Celebrity Weight Loss Expert went on to explain that he has a system of 10 simple “technologies” with guaranteed results that can help anyone totally transform themselves and that he would share those technologies for only $5000 per person. Better yet, he offered a special rate of $3000 to everyone in the room, but only if they signed up right then and there.

It was obvious the whole time that there were shills in the room. From the moment women whistled suggestively when he removed his jacket with a grace reminiscent of William Shatner’s acting style, to the number of participants who openly shared their “I tried it and it really, really worked” stories. But given that over 50 people went through the door into the signing room within a minute of hearing the $3000 price tag indicated that many of them were probably shills as well. Nobody is that willing to drop $3000 on “secret technologies that I’ll only tell you about after you pay.”

But don’t worry, if it doesn’t work for you, your money is 100% refundable. From the Celebrity Weight Loss Expert’s website:

YOUR SUCCESS IS GUARANTEED! This powerful program has never failed one man or woman of any size, shape or age – as long as they followed the program 100%. Participants must commit to the program as outlined 100% in order to qualify for a money back guarantee. Any deviation from the program will alter your personal results.

Great, right? But if the plan doesn’t deliver amazing results, they can simply claim that the participant did not follow the plan 100%. How could you ever really prove that you did follow the plan 100%, especially against someone who can field lawyers backed by $3000 per person who has bought into the program. Therefore, it’s really easy to claim that the program is 100% effective under the conditions outlined above.

I also found the post below from someone seeking legal advice online after attending the same presentation as I did.

His presentation before the signing was very convincing and gave a few details of how it worked, but we had to sign a contract obligating us to $3000 before we heard the “10 secrets” of the program. These “secrets” were things like drink a certain amount of water, cut out sugar and white bread, etc. In other words, nothing that couldn’t have been found on internet for free. It said that once I have heard the 10 secrets to his weight loss program I am obligated to not tell anyone. Once I heard the details, I realized that I could not physically do the program since I have a back problem. He mentioned a person in a wheelchair who did the exercises for an hour each morning among other things. After we signed the contract and a form that said that we could not share the information in the meeting, we were not given a copy of those papers. I did not come to the conclusion that I wanted out until the next day.

Furthermore, I am reluctant to shell out so much money for anything that won’t tell me what I’ll actually have to do.

I’m not going to say a whole lot about these concepts other than that human beings are omnivores.

If you have any questions, I’ll refer you to the Tofu Lion from Futurama.

If you don’t mind all of the work and the rules, then one of these diet plans might be for you. I encourage you to try them. But I also encourage you to not get bound by them. Despite what they may say, no diet plan is perfect for everyone. And that’s why most diets work for a short time and then stop working. If they can give weight loss but fail to provide for all your dietary needs, then they are not a good plan and you will likely quit and rebound.

Another reason that diets sometimes fail to work is because many of them have the “cheat day” worked in to their schedule which, although it sounds good, is counter-productive to developing good habits.

The whole point of Principle 2: Improve Diet is not to follow a specific plan, or leap into something wholeheartedly, it’s to let you know that it’s OK to take baby steps into the plan. You don’t have to start out perfect, just improve.