KILTED! is a philosophy that I developed to help guide my quest for better health. KILTED! Can be summarized by 7 simple principles that are crucial if you want to make a transformational change in your life. Today we move on to the second principle: Improve Diet.

Proteins. Carbs. Fats. Sugars. Thousands of pages have been written about these basics of nutrition. For every page that tells you that one of them is good for you or that it is the key to your health, you can find more pages that say the exact opposite. Navigating the mire of nutritional fact and fiction can be a nightmare. For my take on it all, you can read Weight Loss Basics.

This is one of those areas where I do not claim the least bit of expertise. In fact, for most dietary issues, I defer to my wife as she is both much better read on the subject and just plain smarter when it comes to making healthier choices like these.

The basic equation of weight loss INTAKE – OUTPUT = WEIGHT GAIN / LOSS is covered in the post on Weight Loss Basics. If you haven’t done so already, you really should take a look before continuing on here. This post will deal with the food input portion of the above equation while Principle #3 and Principle #4 (or L and T) will deal with output.

If You Fail to Plan…

Does a construction crew start working on a building without a set of blueprints? Does a teacher “wing it” each day in the classroom without a lesson plan? Does a movie director start filming without a script and storyboards? If they don’t begin without a plan, how can you expect to start eating better without a plan?

I suggest that the first thing you need to do is make a healthy eating plan. It doesn’t have to be detailed at first, since you can always modify and improve it later. But you do need to take a couple of basic steps before you can begin losing weight effectively.

First you should examine you current eating habits. Spend a week or two recording everything you eat and drink each day. You might be surprised what you learn. While you’re doing this, you should also keep a record of how you feel each day – are you tired? High energy? Do you have a mid-day slump? You can compare these trends to the foods you eat that day and the day before and look for trends.

Next, you should make a list of changes you would like to make. Some may be obvious, like you want to reduce or give up soda consumption, reduce sugar intake, try to go gluten free, and such. Others may have only become obvious after noticing that you only had a mid-day slump when you had fast food for breakfast, or that you felt better when you drank more water during the work day.

Now you can at least make an informed decision about what dietary changes you might want to make and you can start your plan. But there’s a saying in the military: “No plan survives contact with the enemy.” When considering a diet plan, the enemy is not the weight we want to lose, but the bad dietary habits which contributed to our weight gain.

We Are Creatures of Habit

A couple of years ago, I had a ton of bad eating habits. Habits that I just did without thinking about them. In fact, when researching lists of bad eating habits, I found that I often combined three of the top five into one daily habit. Most nights after getting home from work and settling in after dinner I, like many of you, would retreat to the computer or to the TV with the family. Not feeling full after dinner, I would grab a bag of pretzels or some other snack and munch away while watching or surfing. It’s pretty obvious that that is not the best course of action to take most nights, but what was I doing wrong there?

The first problem is that I was stocking my pantry with large quantities of such snack foods in the first place. If you don’t have them in the house, you won’t be eating them.

Next, I was engaging in distracted eating – eating while engaged in another activity which prevents you from focusing on your food intake and causing you to miss obvious signs that you have eaten enough. Instead you just keep munching away.

Finally, I was typically eating straight out of the bag. Much like distracted eating, this prevents you from realizing when you have had enough, and instead you can just keep on munching until you hit the bottom of the bag.

Combining those with a host of other bad eating habits is what prevents many of us from making headway when we try to start a diet. All three of the above problems can be prevented by simply not stocking your house with all the junk food we typically do. But if you are cutting back rather than quitting cold turkey, you can defeat the biggest issue of distracted eating by not eating out of the bag. If you choose to snack, then put a reasonable amount into a small bowl, so even if distracted, you will stop when the bowl is empty.

John Foyet, Director of the Baylor College of Medicine Behavioral Medicine Research Center, says “Many people are skeptical about changing their diets because they have grown accustomed to eating or drinking the same foods, and there is a fear of the unknown or trying something new.” It’s easier to maintain a status quo, so our habits can prevent us from making changes even when we want to make those changes. Foyet continues, “Over time habits become automatic, learned behaviors, and these are stronger than new habits you are trying to incorporate into your life.”

And that’s the challenge, isn’t it? Anyone who is overweight, probably got that way because of a lifetime of bad eating habits.

I guess I ate well enough growing up, except for too much snacking through the teen years. But I never ate well during college. In fact, I think I only ever cooked a dozen meals during my undergraduate years. Freshman and Sophomore years were spent in the residence hall system exploring the wonders of dining hall life. The biggest saying I remember from those years was us joking: “Remember, there’s always cereal.”

Looking back to my Junior and senior years living off campus, I remember a lot of Chunky Soup, fast food, and pizza. Throughout college I had also developed a habit of Mountain Dew (a 2-liter each day) and Combos. During graduate school it was more of the same except that I was living in Scotland then, so instead of Burger King and Taco Bell I was having takeout from the corner chip shop (shout out to The Grove on Sauchiehall), or something like Scotch Pie and beans.

I returned to the States, got a job, and went out on my own. For the first three years, lunch was McDonald’s or Taco Bell and dinner was usually Hot Pockets. The meals improved a bit after I got married (Thanks honey!). She also insisted a week before the wedding that I quit Mountain Dew and Combos. I quit both cold turkey and it was rough for a while. In the almost seventeen years since though, I have only had one 20 oz Mountain Dew (I will point out that she purchased it at a basketball game because it was the only cold drink they had) and only had combos a few times.

Those were steps in the right direction, but I only replaced those habits with others. I traded Mountain Dew for Diet Coke and was still snacking on chips and pretzels. And I was still eating too much fast food. I never took a lunch to work, and since I was on the road a lot for the next 12 years, the fast food stayed prominent in the mix. By 2010, I was probably eating McDonalds at least twice a day, four days a week. 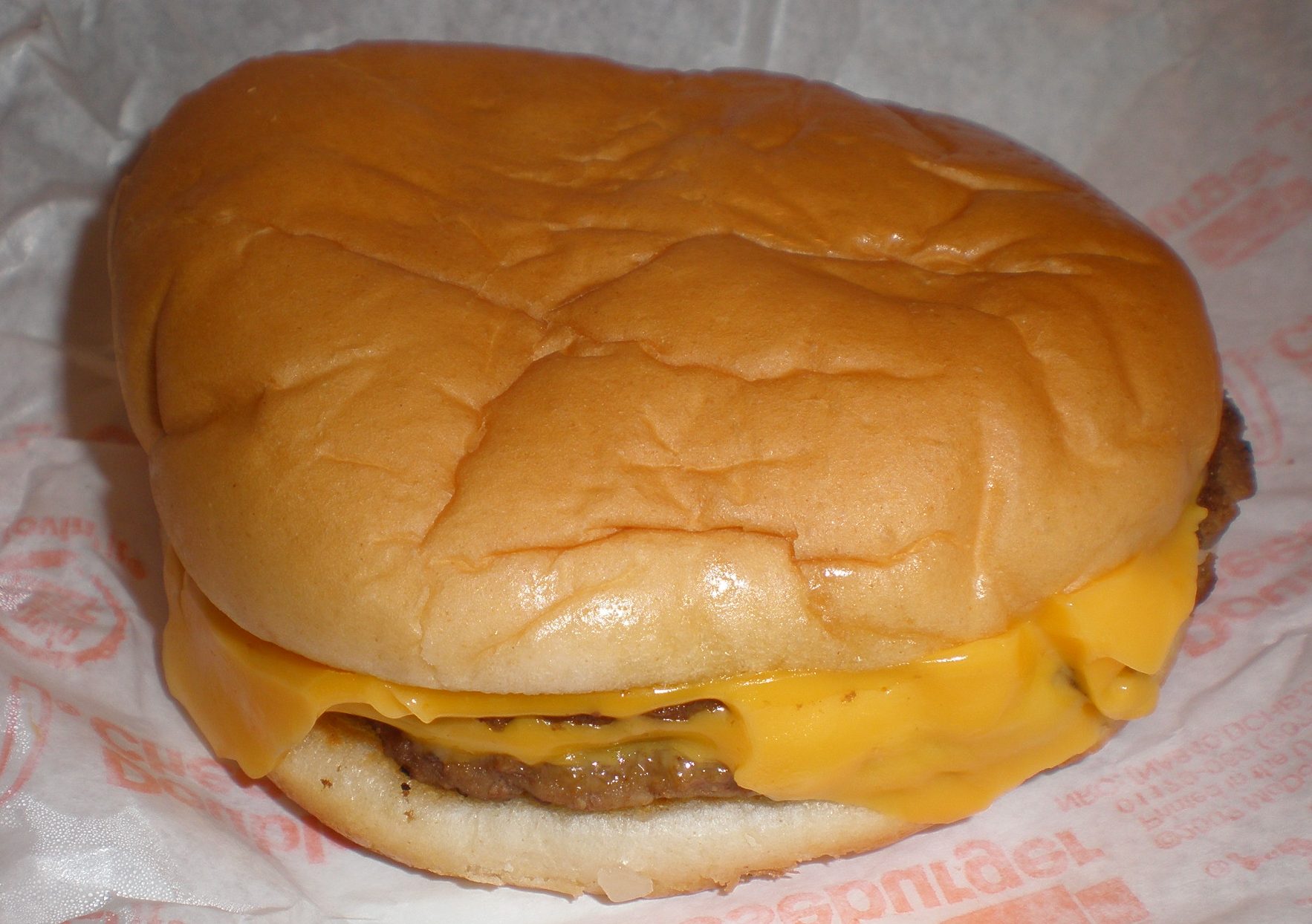 Fast food was quicker (although it never seems like it when you’ve sat in a line for 15 minutes for a greasy burger that ends up tasting like crap) and easier than planning a meal, going to the store, and finding the time to cook for yourself. But that’s the trap that we can easily fall into. With proper planning, a whole week’s worth of meals can be effectively planned and prepared over the weekend.

But too much fast food takes its toll on you. In my case, the years of fast food and other poor eating habits provided somewhere around 100 pounds of fat and high blood pressure. Something had to change!

Something had to change but trying to quit that greasy goodness cold turkey only makes you crave it like it was heroin. Although I didn’t realize it at the time, but I started following the advice of Keri Gans, spokesperson for the American Dietetic Association. She suggests you “Try to gradually incorporate new habits over time, and before you know it, you will be eating more healthfully and losing weight.”

I started by cutting back on the McDonald’s. I mixed in Wendy’s and Chick-Fil-A which on the surface are at least healthier than McDonalds. Over the last two years, I was still having fast food for lunch most days, but instead of McDonalds, it was usually Chick-Fil-A, a KFC Bowl, or Subway.  By late 2017 I was only going to McDonalds every month or two, and I couldn’t even finish the burgers anymore because I couldn’t stand the taste.

Given time, your taste buds will adjust to healthier eating. Nowadays, I haven’t had McDonalds, Burger King, or Chick-Fil-A for three months. We still have Wendy’s maybe once or twice a week, but even that is growing old now.

After some research last year, I decide that the ideal dinner would be a “big bowl salad.” My recipe included Lots of lettuce, cucumber, carrots, sunflower kernels, and chicken. I didn’t measure out the amount of chicken and was sometimes adding a whole chicken breast worth of meat into the salad. I started eating these 4-5 nights a week and this was when my weight loss started.

Switching to so much salad could seem like a shock to the system. But I did two things against the advice of all the big bowl salad articles I had read. I didn’t limit the size of the salads – meaning I made them big enough that they would fill me up and I wouldn’t be hungry and hour or two later and foraging for more food just before bed time. Most shocking to those I described my salads to was my choice of dressing – Wishbone Russian, my favorite.

Most diets would make you think that oil and vinegar is the only possible dressing for a salad, or if you’re daring, you can try some form of a vinaigrette. I can’t stand the taste of a vinaigrette. Had I tried using them, I probably wouldn’t have been able to stick with a salad habit. In my case it was enough. Switching to a salad was enough of a change for my weight loss to start. And much like quitting McDonald’s, it was a baby step into a healthier eating habit.

Many diets fail to work because they deal in absolutes. ”Stop eating this now,” or “Only eat these proteins,” or “cut all carbs.” The average user struggles trying to implement a rigid system while quitting all their bad eating habits cold turkey. Although the fad diets rarely suggest it, I have found that a gradual adjustment has helped me develop better eating habits that stick.

Be sure to read all 7 of the KILTED! Principles and don’t miss Get KILTED! for more related links: