I can’t say the Scotland Trip got off to a good start, but at least everything is ready for the ride. Here’s a little summary of what’s gone on so far. The Flights were fine, and not even too long relatively speaking. I even had enough time to watch Jurassic World 2 and Tag on the Atlanta to Amsterdam leg of the flight. But once I got into Inverness things went downhill quickly.

If you’re an American, do not rent from Europcar. That’s all I can say. It’s really simple. The price was good, a little bit better than Avis and Budget so I went for it. Since I booked through Expedia nobody bothered to mention that “Oh, by the way, all American drivers are in a risk category that requires the purchase of Europcar’s insurance for the low, low price of £42 per day ($55 per day on a 15 day rental), or guarantee the full replacement value of the car on a credit card (does your card have an available balance of $24,000 and are you willing to risk how much of that they’ll charge over a dent?).

So after about 7 calls and about 30 minutes on the phone with Expedia at 35 cents a minute, I finally got Expedia to book a car with Avis and cancel the Europcar Rental which I have been promised a refund.

So I got my Suzuki Swift, drove to Inverness, stayed at the B&B for a night, visited the (relatively) new visitor’s center at Culloden Battlefield, visited the massive Fort George and at 2:00 started on my way to Portree on the Isle of Skye. 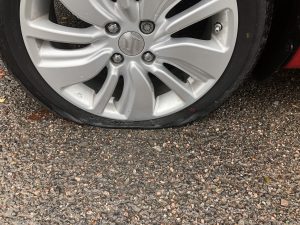 Four minutes later I ran into a bigger problem: 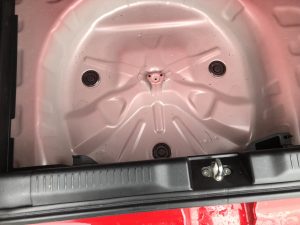 At 4:52 I called Avis Free Roadside Assistance to get a status update on the tow truck only to find out that there was no ticket in the system associated with my car or rental. Given that the garages were about to close and they wouldn’t be able to anything with the tire in Inverness that night, so they promised me (after another 47 minutes on the phone at 35 cents a minute) a tow truck within the hour to take me and the car to my destination in Portree still over 2 hours away. Fine I said. The truck finally showed right about 7:00 and loaded up the car and Callum and I started the drive to Portree which took more like 3 hours because of road closure for construction. Unfortunately for Callum, the road was closing permanently after 10:00 so his return trip from Portreee to Locharron was going to take him through Inverness and take something more like 5 hours.

So this morning, I get the call from the garage in Portree who gives me my two options: Avis Free Roadside Assistance wants the garage in Portree to take me and the car to 3 hours to Inverness to replace the tire and then I can drive back to Portree. Or, they can just replace the tire here in Portree for £57 and I can try to get reimbursed for it from Avis Free Roadside Assistance. So, let’s see, waste a day, or to the most idiotic thing possible. So, I bought Avis a new tire, and if they don’t reimburse me for it (think about how much money I saved them just in not paying for 6 hours of a tow truck) I’ll be sure to let everyone know.

Shortly after the tire replacement, I got my rental bike delivered: 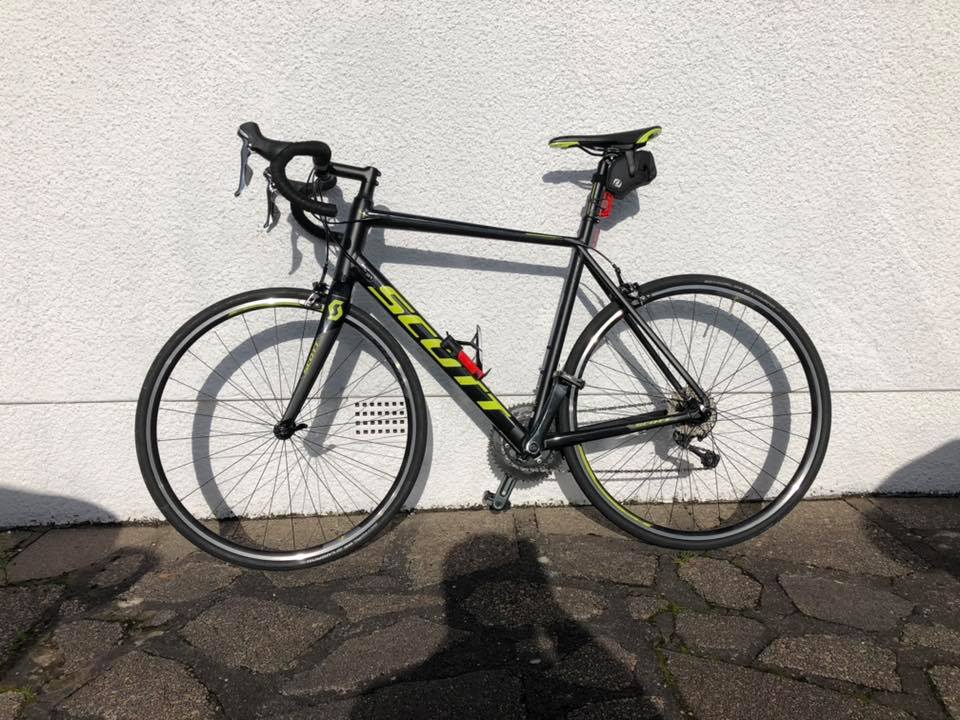 I put in a few miles on it for a lot of reasons. First, I haven’t ridden in a few days, since Saturday actually, so I needed to get a little bit of a warm up in. Second, this is a road bike so it fits a little differently. The saddle is actually pretty comfortable, at least so far, but the steering is different because the pivot point of the handlebars is further forward than I’m used to, but I adjusted within a couple miles. Third, the brakes are different – in the UK, the front and rear brakes are on the opposite sides as on the US, so you gotta be careful not to jam on the front brake only. Also different on this bike is the shifting – I’m used to thumb shifters, but this bike shifts with the brake levers, which also takes some getting used to. Finally, I wanted to get out and actually hit some inclines before I have to do it for real tomorrow. The hills weren’t as bad as I had feared, but in town you still don’t get any long, sustained climbs.

After wrapping up with the bike, I took advantage of the excellent weather today and did a lot of walking around town and hiking in the hills and mountains around the harbor. I did get in 26513 steps so not too shabby there, but I did do a bit too much of it off the trail, got a little wet, and a little sire from the boggy terrain. I knew better than to go across the boggy areas, but I did it anyway. And when I was still a great hike and a great time.

After a great dinner of haggis, neeps, and tatties, (the best I could do for carb loading without any pasta available) I went to the Co-Op for some supplies, came back to the B&B, and got my riding kit all packed up for tomorrow. 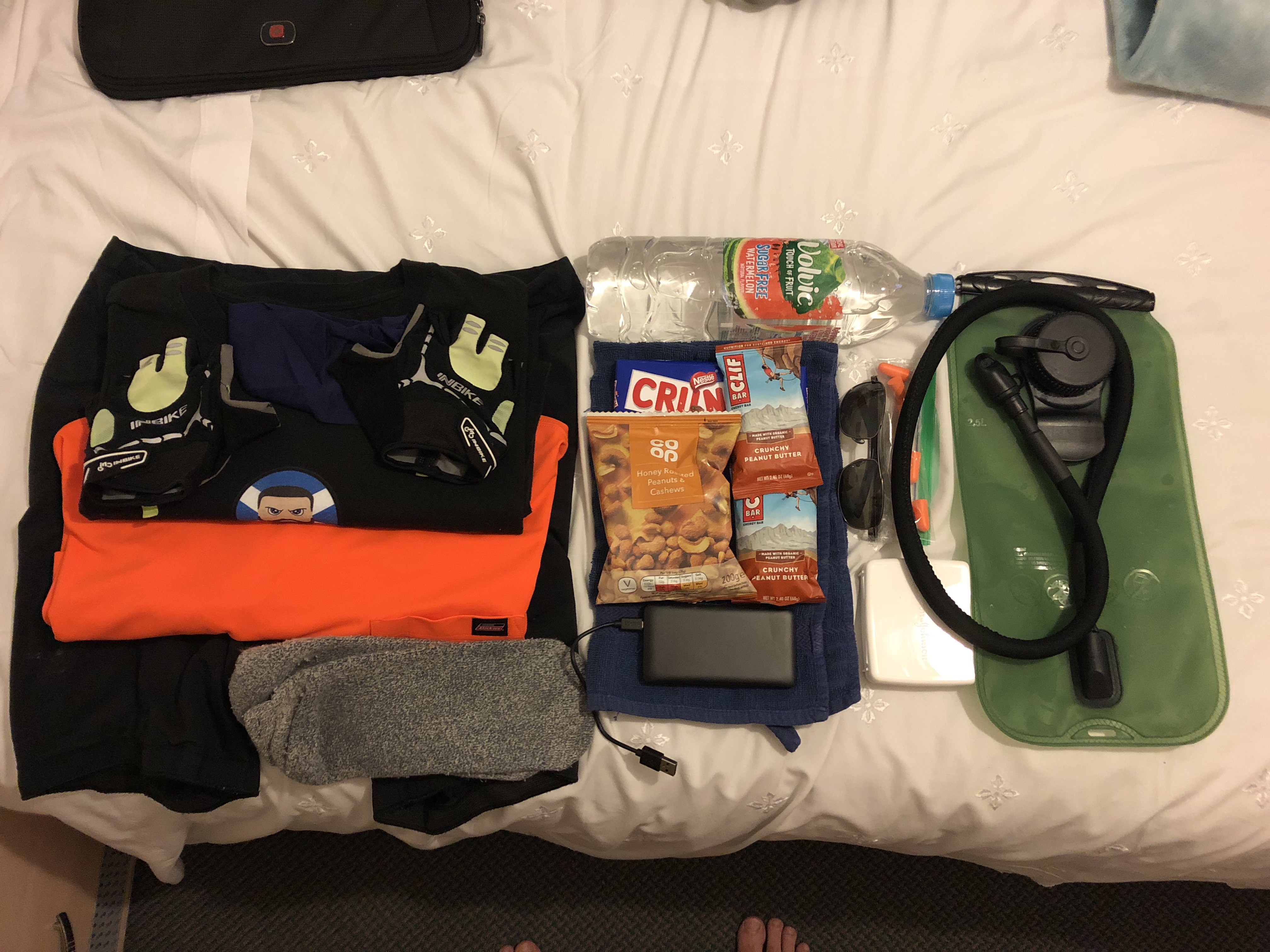 And now I’m staying up way too late finishing this post hunched over the computer when I should be getting a good night’s sleep before the ride. So I’ll end it here, get this posted, and get some sleep.

I’ll post about the ride here tomorrow night, but if you want to try to follow some of it (maybe even live) I’ll put as much as I can on Facebook tomorrow – battery life, cell reception, and weather permitting!