By the time I left for Scotland, I had managed to complete six rides exceeding 50 miles with the longest being 52.26 miles. Even though I knew it was insufficient, I had done my best to practice hills by riding back and forth across highway overpasses, but only managed to log as much as 113 feet of climbing during those practice runs. I was as ready as I was going to be.

The Isle of Skye

I had made my plans to arrive on Skye two days early and complete the ride October 11th, before beginning a clan International Gathering I would be attending. My rental bike was delivered to Portree from the Skye Bike Shack the day before (I would highly recommend working with them if you ever want to rent in Scotland) giving me time to do a little shakedown ride. The rental was a Scott brand road bike, and I considered embarking right then and there as the weather was so nice and the forecast called for rain and winds up to 50 mph for the ride. But it was already after 11:00, and just too late to get started.

At approximately 8:30 AM on Thursday, October 11th, 2018 I set out from my Bed and Breakfast through Portree and then north on the A855. The first encounter with the hill coming out of Portree was a little challenging because it was more climbing than I had ever managed before, but after got the hang of how to shift through the hills, not even the worst hill on the ride turned out to be as bad as I feared they might be.

The weather was great that morning, with no hints of the promised rain or winds. Within the first half hour I was passing the Old Man of Storr, the first major landmark on the ride. 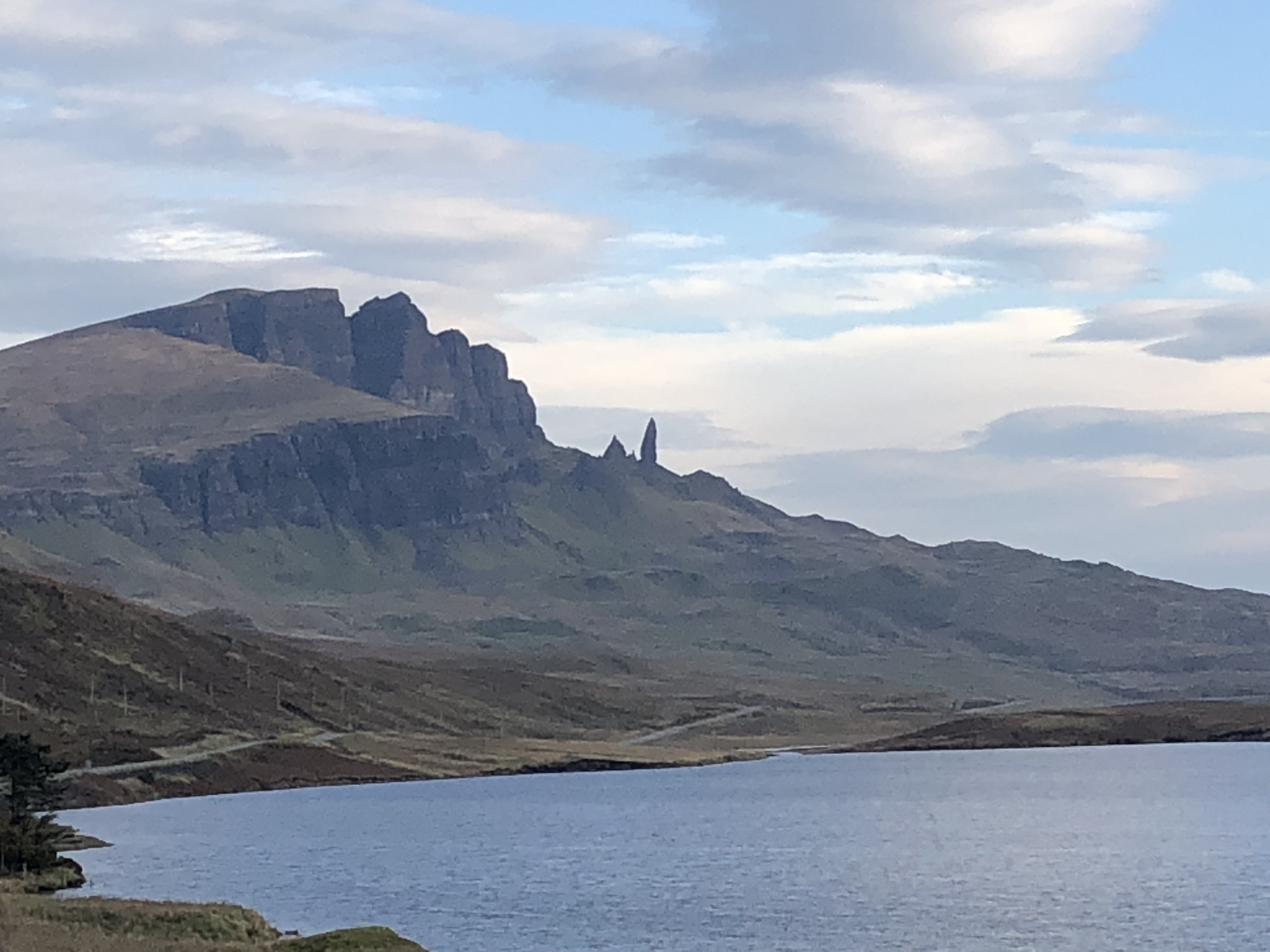 Without stopping I continued north to Lealt Falls and the viewpoint for Kilt Rock – so named because the folds of the rook look like the pleats of a kilt. This area is also famous for having many fossils and even a series of well-preserved Jurassic dinosaur footprints.

After passing Lealt Falls, the traffic subsided significantly and, keeping a watchful eye ahead for potholes, there were great views of the Quirang to my left. The next 10 or so miles saw long stretches where the only sounds were the wind and my back and the hum of the bike tires on the road (and a few sheep bleating a hello as I passed). 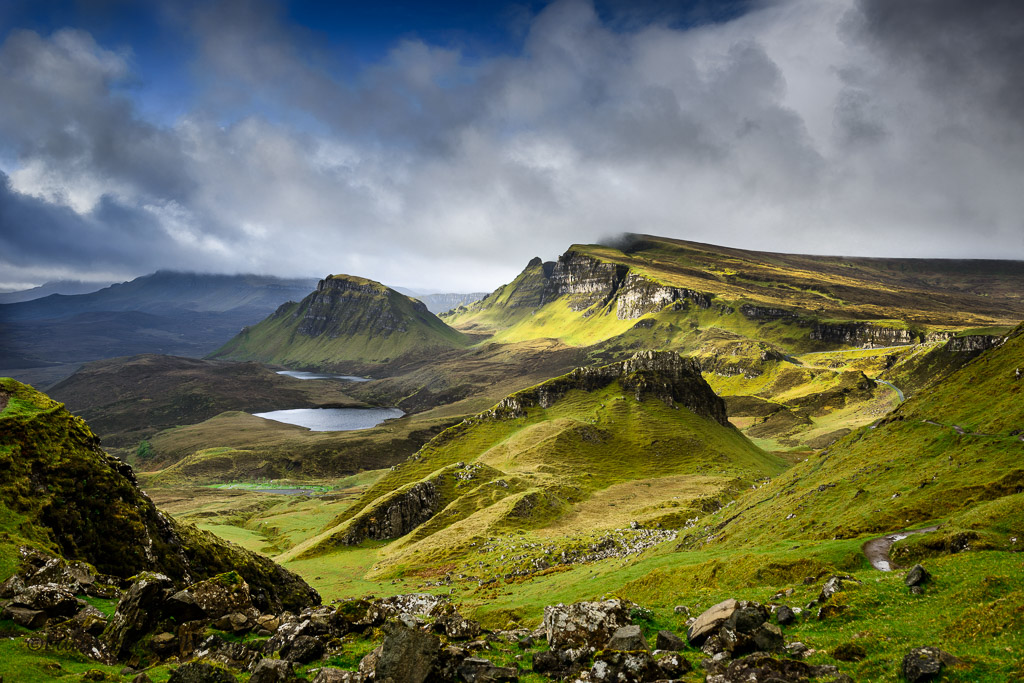 I had a smooth ride through Flodigarry where the A855 begins to turn east towards towards Duntulm. As I began heading eastwards across the tip of the peninsula, dark clouds were rolling in from the south and the winds were picking up. In truth, they weren’t stronger, they were now crosswinds instead of the comfortable tailwind I had been enjoying.  But I pressed on to Duntulm on the west coast for a break (and a Lunch of energy bars) at the castle ruins which were significant as the mid-point of the Trotternish Loop. (This picture below is from a different visit). I had been riding for 2 hours 12 minutes, which was only a little slower average than my usual 15-16 mph.

By the time I had finished my energy bar and the walk to the castle ruins, it was raining, and I was facing headwinds of 20-25 mph. But I have ridden in heavier rains before, so I pressed on to the south through one of the two toughest climbs of the ride. Seven miles later I was at a fork in the road above Uig, the biggest decision point of the ride.

Do I take the turn and the 4 miles of climbing up to the Quirang parking lot? Or do I take the easy way out and follow the road down into Uig, proceed on the A87 back to Portree, and be happy with 48.5 miles? I figured that I would regret taking the easy way out so pushed through the climb up to the Quirang. After 2 miles of climbing, I was regretting the decision. I was still considering turning back by 3.5 miles into the climb, but wit the end in sight, it would have been crazy to do so. The view was worth the effort, as was the stares from some of the people asking if I really rode a bike all the way up there.

The best part of a climb like this was that I was able to rest as I coasted for most of the next 6 miles down into Uig. The climb back out of Uig on the A87 was the second of the two toughest climbs on the ride.

The remainder of the trip was mostly uneventful. Because of the wind and the intermittent rain I just pushed on through to Portree, skipping the previously planned stops at the Fairly Glen and Castle Uisdean. I also didn’t take many pictures because my phone was running low on battery power. I pulled back into Portree around 4:30 in the afternoon. I was tired and sore, but also victorious!

In total, the ride (including stops) took me around 8 hours, but I logged a total of 6 hours 10 minutes in the saddle. I rode a total of 57.31 miles that day, my longest ride ever, and I climbed 2926 feet, much more than I would have expected to do. 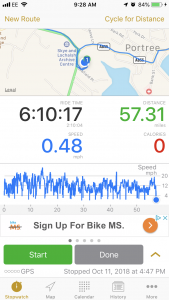 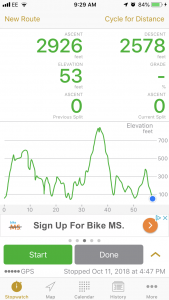 It was the last time I will be able to ride for at least 2 weeks until I get back home.