KILTED! is a philosophy that I developed to help guide my quest for better health. KILTED! Can be summarized by 7 simple principles that are crucial if you want to make a transformational change in your life. Today we move to the sixth principle: Don’t Quit.

This seems obvious, and is probably a cliché as well, but the key to success is perseverance. Once you have started an undertaking, fitness or otherwise, quitting is like throwing away everything you’ve invested into your progress. Obstacles may slow you down, but you have the power to decide how they affect you. Will you quit and let your obstacles stop you? Or will you persevere, conquer them, and grow stronger in the process?

There are hundreds of stories of those who chose not to quit and found success. Here are a few:

In 1927 and instructor at the John Murray Anderson Drama School told Lucille Ball that she should find another profession, any other profession than acting. As you know she became the pioneer of women in comedy and television.

Decca Records turned down the Beatles for a record contract because they “didn’t like their sound” and though guitar-based bands were on the way out. Where is Decca Records now?

Chester Carlson was turned down by 20 companies before the company which became Xerox bought the rights to his electrostatic paper copying process. After that investment, Xerox became synonymous with photocopying.

There are more. Many more. You probably have your own story of failure – I know I do. But when you choose not to quit, you grasp at success. And when you keep grasping, you will eventually achieve your goals. This is how you achieve success. Don’t Quit!

Nothing about getting fit is short term – getting fit is about the long haul. You will work hard, and you will train hard. You will become tired, even exhausted. You will struggle. You will persevere. At some point, you will consider quitting. It will be a decision you and you alone will have to make.

You will be tired, exhausted, frustrated, or just plain fed up. You may not be satisfied with the progress you have been making, or you may not have seen any progress. You may have checked your weight every day for two weeks and the number hasn’t changed, or worse yet, the number may be higher than it was when you started.

“What’s the point?” you may ask yourself.

Runners call this “hitting the wall” – the point in any race when you want to quit.

Break through the wall and keep going!

But if you quit, you will never see your success.

The Fatty on the Track

There was a story that I first saw a couple years ago on Facebook. Some sources say it started there, others say it started on Reddit. It may not even be a true story, but for our purposes, that doesn’t matter. In looking for it again, I stumbled across articles debating whether the unknown author wrote it as an inspirational story, or whether it is laced with condescension and insult.

I remember it being an inspirational story, and that’s why I initially started looking for it. But rereading it again, I now plainly see the insult and condescension in the author’s choice of words. Because of this and the strong language, I debated for several days whether to include it in my post or not. Ultimately decide to use the original text for reasons I’ll explain afterwards. (If you’re the sort who needs one, consider the previous paragraph your trigger warning.)

If you’ve never seen this message before, or if you haven’t read it in a while and want to, here it is:

To the fatty running on the Westview track this afternoon…

You, whose feet barely lift off the ground as you trudge around the track. You, who keeps to the outside lane, footslogging in the wrong direction. You, who stops for water breaks after every lap, and who would probably stop twice a lap if there were bleachers on both sides. You, whose gaze drops to your feet every time we pass. You, whose sweat drenches your body after you leave, completing only a single, 20-minute mile…

There’s something you should know: You fucking rock.

Every shallow step you take, you carry the weight of more than two of me., clinging to your bones, begging to be shaken off.

Each lap you run, you’re paying off the debt of another midnight snack, another dessert, another beer.

It’s 20 degrees outside, but you haven’t let that stop your regimen. This isn’t your first day out here, and it certainly won’t be your last. You’ve started a journey that lasts a lifetime, and you’ve started it at least 12 days before your New Year’s resolution kicks in.

Yu run without music, and I can only imagine the mantras running through your mind as you heave your ever-shrinking mass around the next lap. Let’s go, feet. Shut up, legs. Fuck off, fat.

If only you’d look up from your feet the next time we pass, you’d see my gaze has no condescension in it.

I have nothing but respect for you. You’ve got this.

You’ve probably read “The Fatty on the Track” before. And like me, you may have forgotten the exact words but remembered the final message as one of encouragement.

In a metaphorical sense, this fatty could be any one of us, in any kind of situation. Using words like trudge, footslogging, sweat drenches your body, shallow steps, and clinging to your bones, shows the deep struggle of the subject facing a daunting a task that he or she is not ideally equipped for. It could represent any struggle, fitness or otherwise.

Ask yourself: What makes you want to keep going?

It may be a story like the one above, about someone on the same journey as you, that inspires you to keep going. Or maybe it’s the story of someone who has already completed the journey. Maybe you have your own internal motivation about achieving a specific goal: looking better, fitting back into a specific dress, or pair of pants (or a kilt). Maybe it’s a health-related goal like lowering your blood pressure, getting off medication. Or maybe its deadly serious, like your desire to get healthy so you can live longer and spend more time with your kids.

Whatever your inspiration, take it and use it. Use it to grow stronger.

…Or Find Your Hindrance

Maybe you don’t like the message of “The Fatty on the Track,” and maybe it offends you. Remember that as Americans, we have a right to free speech thanks to our Constitution, but that also means that people have a right to say offensive things.

If it pisses you off, then use it. Imagine that it’s you the author is talking about and channel your anger or disdain into action. Prove him wrong. Pick up your feet and move.

Ask yourself: What makes you want to quit?

Does running a 5K or a marathon seem like too much work? Well, it probably is – for now. Don’t get stuck on lofty goals. No marathon runner’s first run was 26.2 miles long. Set realistic and achievable goals for now and build up to the lofty ones. A journey of a thousand miles begins with a single step, and that’s all you need to focus on now, the first step.

Can’t find the time to work out? Right now, someone who is busier than you has the time to exercise. Still can’t find it? Make it. There have been volumes of business books written on time management and the biggest takeaway is that if want to make time for something, you need to schedule it. I’ve had plenty of managers who were perfectly fine with me scheduling in all the personal and family time I wanted so long as it was in my schedule and my other work got done.

Whatever your hindrance, fight it and beat it. Use it to grow stronger.

Many of us who are out of shape may feel embarrassed or self-conscious about working out in public, just like the subject “whose gaze drops” every time he or she passes another runner. We may not like the way we look. We may be insecure about our ability to run properly or about lifting weights with the proper form.

In the long run, your opinion is the only one that matters. If you think you can do it, you can! Keep going and Don’t Quit!

Because for every critic you find, there will be a trainer, a neighbor, or a new friend willing and able to offer you some advice, lend a hand, or give you a spot. They may not understand your situation. They may never have been where you are now. But maybe, just maybe, they have been exactly where you are right now and they see the same drive in you that got them through.

The “Fatty on the Track” story may not be what inspires you. My story may not inspire you either. But keep going. Don’t Quit, and you will be the author of the inspirational story – your own! 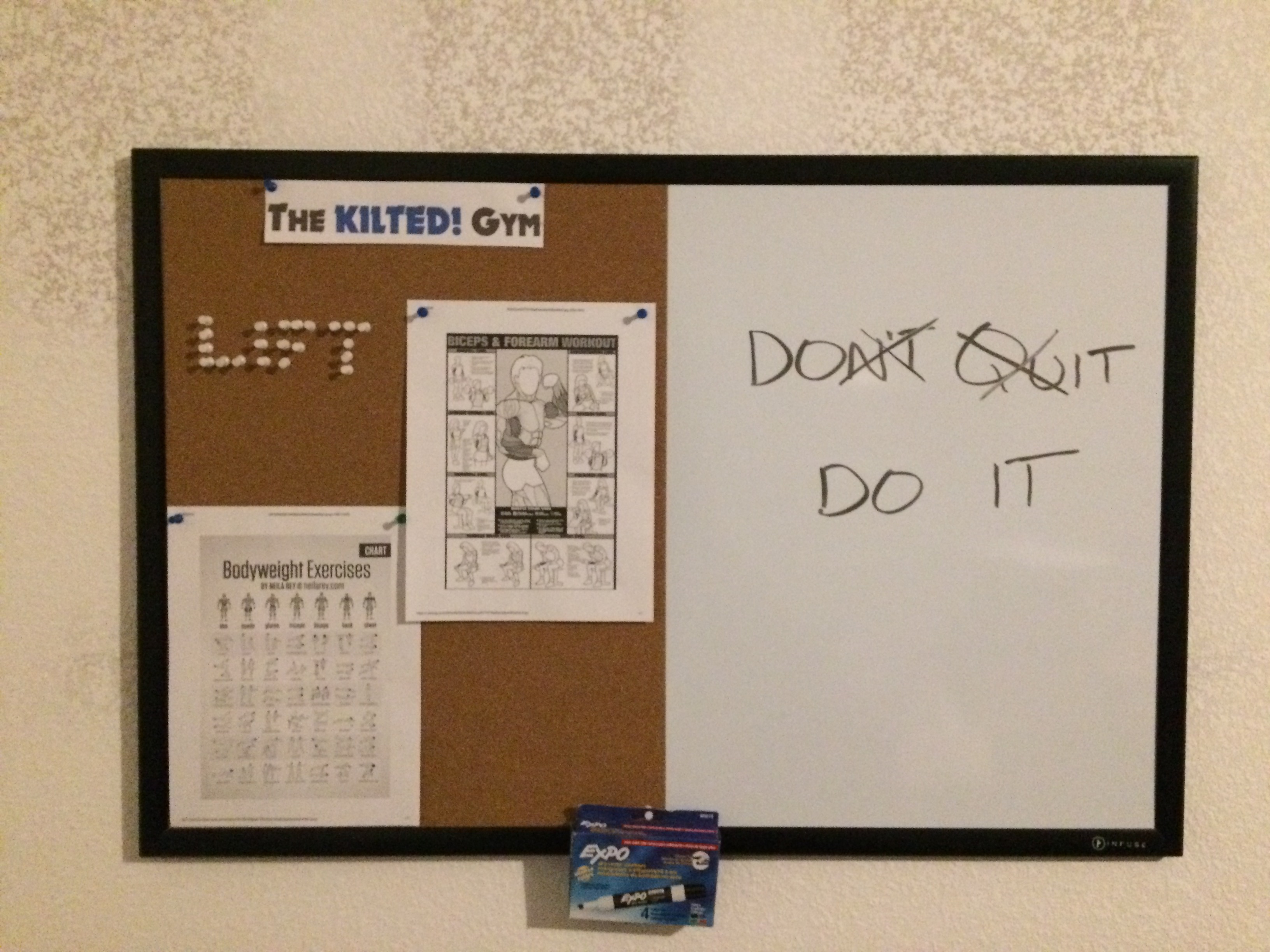 Be sure to check out Get KILTED! for more information on the KILTED! Principle and links to more relevant blog posts.

Be sure to read all 7 of the KILTED! Principles and don’t miss Get KILTED! for more related links: